Muhammad Ali Moved People Out of Their Comfort Zones

On Friday, one of the most well-known figures that ever lived departed this earth. Immediately upon his death, the commentary in regard to his life began. Good, bad, complimentary, critical and extreme are just a few examples of the sentiments that have graced varied segments of the media. 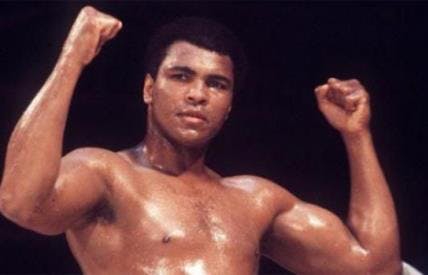 Boxer and activist Muhammad Ali, known in his early life as Cassius Clay, was one of the most controversial figures in American history. He engendered feelings of delirious admiration among his supporters and frequently vile emotions from his detractors.

Ali was larger than life ― bold, proud, confident, and yes, arrogant. The latter trait was evident in some of his many legendary proclamations such as “I am the greatest,” “I’m so pretty” and “I’m a bad man.” It also was apparent in his brazen taunting and harassment of Sonny Liston, Joe Frazier and other rivals. He said what he felt and he spoke what he believed to be truth to power and was not concerned with how other people felt.

Ali was a man of principle. While it could be argued that some of his principles were debatable (which can be said of anyone) he still, nonetheless, had them. This was evident in his conscientious objection to the Vietnam War, his refusal to serve and the forfeiting of his heavyweight title for several years. He was a vociferous critic of the racism that permeated of his era and stood steadfastly with Dr. Martin Luther King Jr. and Nelson Mandela and other leaders of African descent at a time when forging such an allegiance with such men was politically, socially and financially risky.

While many other prominent individuals of his time period, Black and White, stuck their heads in the sand, looked the other way, and otherwise utilized a “see no evil, hear no evil, speak no evil” approach to issues of racial and other forms of social injustice, Muhammad Ali, on the contrary, told it like it was ― consequences be damned. Because of his brash, blunt and brutally candid opinions on a plethora of issues, Ali earned the enmity of many people. Large numbers of Whites across the political spectrum detested him for his candor in regard to poverty, racism and other injustices. He also earned the ire of certain Blacks, particularly older pre-1960 civil rights era Blacks who, like many of their White politically right of center conservative cohorts, saw Ali as an arrogant “negro” (the term used to describe Blacks at this time) young man who was too uppity and irresponsible for his own good as well as potentially jeopardizing progress for other Black folks.

For all his positive attributes, the fact is that, Ali, at times, could indeed be careless in his rhetoric and contradictory as it related to his religious faith. Like many men of his era, he was vehemently sexist and engaged in infidelity. His position on interracial marriage was bigoted, draconian and he did not hesitate to hurl vicious, verbal hand grenades toward others regardless of whether or not such brutal rhetoric was warranted. His sharp tongue and blunt, acerbic wit earned him numerous enemies. It also afforded him many allies.

As he grew older, even as his health deteriorated and Parkinson’s disease decimated his body and silenced his voice, Ali still served as a U.N. Goodwill Ambassador. He visited children suffering from disabilities, encouraging them with his presence and celebrity and telling them that they, too, could be destined for greatness. The world stood in awe as we witnessed the former heavyweight champion light the torch at the 1996 Summer Olympics in Atlanta. Just his mere presence at the event caused more than few eyes to fill with tears as millions were overcome with emotion.

Muhammad Ali was a controversial, charismatic, magnetic figure who managed to set the world on its heels. In some cases his very presence prompted controversy. He was a man who took people out of their comfort zones. He challenged the status quo. He said it as he saw it and he kept it real. He was one of a kind and he will never be forgotten.

May he rest in peace.