Running a college or university isn’t always about the book learning.

Sometimes, administrators come to this realization: the Ivory Tower is just a hotel and food service business for the educated class.

But to deal with that effectively, they need to understand that a school’s workers are just as important as its “A” students. 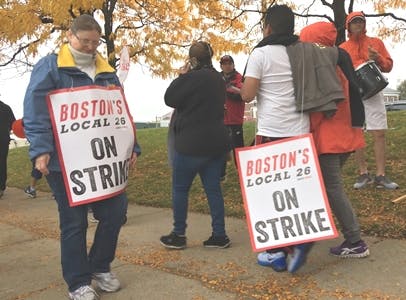 So why hasn’t Harvard, with an endowment of $35 billion, come down off its high horse and worked to give 750 striking dining hall workers what they deserve—a living wage of $35,000 a year and a break on health care contributions?

An embarrassing strike that began Oct. 5 is closing in on a fourth week.

Four months of negotiations prior to that yielded nothing, forcing the workers to the picket lines for the first strike at the university since a one-day strike in 1983.

Harvard says the $21.89 an hour is higher than most college dining halls and better than other local dining establishments.

But Unite Here Local 26 members say the hourly wage is meaningless compared to what the annual wage is. Union members don’t get paid for summer or winter breaks.

And workers aren’t eligible for unemployment because Harvard hires them directly and not through contractors.

To make up for the breaks, Harvard has offered weekly stipends during the down times. But the $150-$250 talked about is a far cry from the $450 the workers are seeking.

In the meantime, some dining halls on campus have closed, while others have stayed opened staffed by volunteers.

Some students on meal plans continue to go, but a great deal of support for the workers has come from both students and faculty who have refused to cross the picket lines.

Time for a reality check by the university.

As a working class kid on scholarship to Harvard in the ‘70s, I sometimes felt I knew the workers more than my fellow students. My dad was in the cooks union. So my friends at Harvard were often the cops in the Yard who were Caribbean immigrants; the Boston locals I worked next to in the mail room; the older African American and Latino women who served us food daily in the dining halls.

I remember all their faces as much as I do this thing they served called Turkey Tetrazinni, a kind of antibiotic in casserole form.

But students come and go.

The real Harvard is made up of workers like those dining hall ladies.

Today it includes current dining services worker Antoine Bourghol, 70, a Syrian immigrant, who only joined the strike when he saw the university was making him kick in as much as $4,000 more for health care.

Just as much as the students who pay in excess of $63,000 to attend Harvard, Bourghol and his co-workers at $21.89 an hour take great pride to be part of the institution.

To meet workers’ demands of $35,000 a year would be peanuts for the $35 billion institution.

Time for the school to show some moral leadership and set an example for the rest of higher ed.

Harvard can do that easily by taking care of the people who never graduate but choose to give their lives to make Harvard work.

Emil Guillermo is a veteran journalist and broadcaster who writes for http://www.aaldef.org/blog