Dr. Vanessa Siddle Walker began her trajectory into education believing she wanted to be a journalist. She enrolled at the University of North Carolina at Chapel Hill as a journalism major but discovered that the field was not her calling.

“I quickly learned that I didn’t like how journalists were expected to write because I wanted to talk about context and they wanted you to be very pristine,” Walker says.

Soon, she had the opportunity to work with students – substituting for a former high school teacher and engaging with students at a vacation Bible school class during the summer.

“I loved it … I derived energy from teaching,” she adds, noting that she decided to switch majors. “I’ve never looked back on that.” 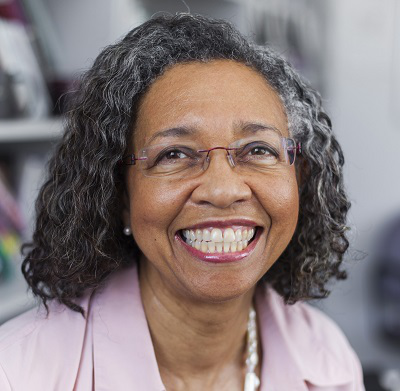 Walker pursued graduate studies in English education and teaching, curriculum and learning environments, earning a master’s degree and an Ed.D. from Harvard Graduate School of Education.

Her interdisciplinary interests in teaching, history and school desegregation have molded her scholarship and her own pedagogy in teaching students at Wheelock College, Elon University, the University of Pennsylvania and, currently, Emory University, where she holds the Samuel Candler Dobbs Professorship of African-American Educational Studies.

For Walker, elements of teaching and history are “all blended,” she says, because the research she does focuses on the segregated schooling of African-American children.

“When I’m writing history, writing about that period, I’m learning about how people made a difference for young people – made them believe in what they could achieve in a time period that, by any standards, was an oppressive time period,” Walker says. “So I’m learning about good teachers and teaching at the same time that I’m facing doctoral students or undergraduate students, and I also try to keep up my skills with high school students.”

Walker takes her students on field trips and shares historical and contemporary stories on African-American pedagogy and teacher advocacy. She adds that much of her teaching and mentoring style for her Emory students does not derive from what she learned in school.

“It really comes from those old Black teachers who have become, in effect, my absentee mentors,” she says. “I really do try to have high expectations for my students for what they’ll do and what they’ll become. I teach in a way that’s very similar to the people that I write about.”

Walker is the author of numerous scholarly publications, articles and books, including Their Highest Potential: An African American School Community in the Segregated South; Living the Legacy: The Historical African American Professional Network as a Model for University and School Collaborations and most recently, The Lost Education of Horace Tate: Uncovering the Hidden Heroes Who Fought for Justice in Schools.

In The Lost Education of Horace Tate, Walker traces the crucial role of Black teachers back into the historical narrative of school desegregation. These Black teachers of the not-so-distant past built strong advocacy networks and taught their students to aspire to be “full participants in a democratic structure denied to them,” while also teaching them to critique democracy, Walker says.

The “Civil Rights Movement was a created generation infused by the curriculum that these people put in their schools,” she adds.

As efforts to achieve total desegregation floundered over the decades due to active resistance from opponents of integration, the closing or demoting of Black schools and the firing of thousands of Black principals and educators, Walker envisions The Lost Education of Horace Tate to be a “dire portrait of where we are now” in education.

It is both a historical work to understand how the nation has fared on efforts to desegregate schools – even as some school districts are more segregated than before – and a work that challenges the U.S. to move toward how schools “should have been integrated,” Walker adds.

Walker has given widely-publicized lectures, and her work appears in journals such as the Harvard Educational Review, Review of Education Research, American Educational Research Journal and Teachers College Record.

The scholar has been recognized for her work spanning over more than two decades with honors and awards that include the prestigious Grawmeyer Award in Education and the American Educational Research Association’s (AERA) Early Career Award, Best New Female Scholar Award, the Best New Book Award and the Outstanding Book Award.

During her time at Emory, Walker has served as the project founder and director of Teaching in the Urban South (TITUS).

She has also received awards from the Conference of Southern Graduate Schools and the American Education Studies Association. In March, she was voted president-elect of AERA, and she will assume the presidency in April 2019.

Her advice to younger generations of educators is to “know who you are” and to learn about the strategies needed to remain resilient for staying the course for change.

“We need to explain pedagogical and educational history that has helped generations before us succeed in dire circumstances,” Walker says of her educational responsibility. “We are not the first generation where it’s hard. It’s been hard before.”