The interconnection between the roles of educators and activists in today’s political climate were evident on Monday during a roundtable discussion at Howard University that featured students, former U.S. Secretary of Education Dr. John B. King, Jr. and social justice activist Brittany Packnett.

Noting low historic voting turnouts for midterm elections, Howard University School of Education Dean Dr. Dawn G. Williams reminded the students sitting before her of their responsibility to be civically engaged. The charge served as the underpinning of the discussion on racial justice and voter engagement. 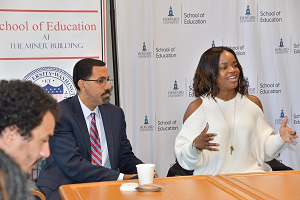 “Too much is at stake with this election,” Williams told the handful of Howard students.

King added that although his organization, The Education Trust, is nonpartisan, “we want people to vote,” he said.

Opening the discussion, King asked the students to reflect on their earliest exposure to civic and voter education. Many recalled hearing members of their family sharing the value of voting and staying informed about social issues. One student noted that he listened in on conversations between more politically engaged college friends and sports teammates.

Other students shared that middle school and high school Social Studies and American Government classes introduced them to civic issues, even though distinctions between AP and traditional classes made a difference in how much information a teacher shared.

However, as Howard doctoral student Frances Y. Adomako grew older, she said she began to grapple with a question: “What’s the point of voting if the same people are in power?”

Similarly, Lyndsie A. Whitehead, a doctoral student and research assistant at Howard, added that it can be frustrating when “hashtag activism” amongst social media users does not translate into political action or effective policy.

The remarks led the roundtable participants to address the “voting vs. activism” dichotomy.

“I don’t think it’s a versus thing,” said Bria M. Williams, a senior at Howard. Several other students agreed with Williams, who said people should “lead by example” by simultaneously voting and getting involved with causes that work to implement social change.

Packnett, the social justice activist who is a co-founder of the police reform organization Campaign Zero, said thinking of voting and activism as either-or will leave underrepresented communities “left behind.”

“A lot of the rights that we enjoy access to today came about because people were willing to sacrifice in protest and in policy. They have to go together,” she said.

Further, Packnett said she reminds people to see the film “Selma,” particularly because of Martin Luther King, Jr.’s protest marches and his political engagement with President Lyndon B. Johnson on voting rights legislation.

“It is not just about showing up on Nov. 6 or whatever Election Day exists that year,” Packnett told the students. “It is also about ensuring that we are engaged both as citizens and activists thereafter to hold those folks accountable.” 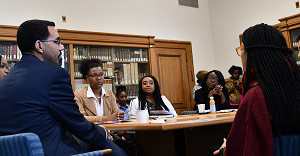 Dr. John B. King Jr. with students at the roundtable discussion

The activist said that she is excited to see potential historic firsts in the upcoming midterm elections. Stacey Abrams would be the nation’s first female African-American governor, and “we might get two more Black governors in former slave states” if Ben Jealous in Maryland and Andrew Gillum in Florida win their elections, Packnett said.

A Pew Research Center report published in late September showed that current voter enthusiasm is at its highest than during any other midterm election in the last two decades.

Students reflected on the issues that resonated with themselves and their communities and what they hope the next political leaders will address. They spoke about education – closing achievement gaps, improving teacher education programs and enhancing education and social policy.

Another student said they hope that elected officials will address the student debt crisis and affordability issues in higher education. Others spoke about strengthening and empowering families.

“It is an intersection of so many things,” said Whitehead, connecting issues of housing and health disparities to other civic issues.

Voting and activism become “so paramount” because “our children’s lives are on the line,” she added.

Connecting activism to education, the students pointed to several faculty members in Howard’s School of Education who instilled in them hope, optimism and the importance of civic engagement to enact change for future students. They said having professors whose work is grounded in theory and practice, who create cultures of community and who share the realities of history and its current and future implications for minority students makes a difference.

“Make sure to preserve that when you leave here,” King said about creating a sense of community among educators.

Packnett challenged the Howard students to think of themselves as a “glitch in the system.”

“You had a purpose before anyone else had an opinion,” she said. “It’s not just about helping people who look like us navigate a system that was never built for us, it’s also about subverting the system to create our own spaces and systems that actually work for our communities.”