Make School, a postsecondary educational program created by two 20-something techies, is now offering an industry-driven, project-oriented bachelor’s degree in partnership with Dominican University of California that students can complete in two years – and don’t have to start paying for until they graduate and secure a job that pays at least $60,000 a year.

The bachelor’s degree in Applied Computer Science gained accreditation this fall through the WASC Senior College and University Commission, a critical development aided by Dominican. Make School’s current enrollment is 110 students – up from 40 a year ago and about 45 percent students of color – and the first bachelor’s degrees may be conferred as early as fall 2019.

“Our purpose is to create avenues of upward mobility for students of all backgrounds interested in science and technology,” said Ashu Desai, who founded Make School with high school classmate Jeremy Rossmann. 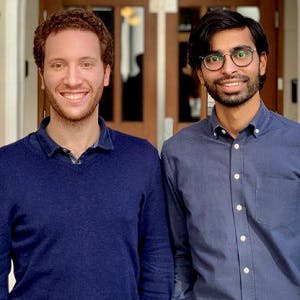 A college degree wasn’t what they had in mind, however, when they teamed up in business and began offering a summer program in computer science a few years back.

Desai, 26, and Rossmann, 27, met in a computer science class at the prestigious Menlo School in 2007. After graduating, Desai enrolled at the University of California at Los Angeles (UCLA) and Rossmann headed to Massachusetts Institute of Technology (MIT), both studying computer science.

Desiring more hands-on, project-focused learning, they decided in 2011 that their traditional college programs and strong emphasis on theory weren’t working for them. They took some time off and never returned.

But they stayed engaged with the industry. By 2013, they were providing computer science curricula to MIT and Carnegie Mellon University. They decided to create a summer program to teach students how to build apps and wanted to provide increased access to women and minorities, said Desai.

That evolved into a pilot program in 2014 for college computer science students to supplement their liberal arts learning with more practical instruction in areas such as building software. In 2015, they launched the Product College program in San Francisco.

“The students felt more engaged in the classroom than ever,” recalled Desai. “They were excited and felt lots of agency and control over the types of things they were learning. A lot of those students felt how we had felt, so we decided to design the ideal college experience for students like us.”

Make School’s Product College will cease to exist this year now that the bachelor’s program is in place, and current students will transfer into the bachelor’s program. Desai and Rossmann designed a project-driven program with a cost schedule and financing structure intended to keep their students from adding to the current college-debt crisis.

The result is that students can pay the $70,000 tuition for the accelerated two-year program later by signing an income-share agreement that allows them to pay nothing up front or during school in lieu of a percentage of their income after they graduate and start earning at least $60,000 a year. 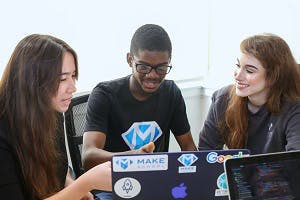 Providing equal access to the tech field for all students is a Make School value, Desai said. Ninety percent of current students have opted for income share and two in three participate in a plan that fronts them funds for other expenses such as housing and food and rolls that aid into the income-share arrangement.

Students have interned and worked at 60 companies, ranging from Apple, Tesla, NASA and PayPal to Pandora, Yahoo, Twitter and the San Francisco Chronicle. They can graduate in two years by taking four classes in each of the four seven-week terms during the academic year and two six-week terms each summer that include an internship one summer and study another summer.

“Reducing time to degree was important to us, and the cost,” said Desai, noting that underrepresented students tend to stop out of school more due to family, financial and other concerns, fueling disparities in completion rates.

For applicants who need extra support, Make School this year introduced a three-month ramp program. About 25 percent of current students went through that pipeline, said Desai.

To take Make School to a degree-granting level, the basic components of a liberal arts education and accreditation were needed. After researching multiple California schools, Desai and Rossmann chose to partner with Dominican.

Dominican worked with Make School under a new “incubation” policy through which already-accredited Dominican vetted Make School. Dominican faculty voted to approve the partnership in May, the memorandum of understanding was signed in the summer and accreditation was granted last fall.

“We have many shared values – an emphasis on first-generation and underrepresented students and pairing liberal arts with professional education,” said Desai. “It’s the best of both worlds.”

Dominican president Dr. Mary B. Marcy  said her faculty “looked at it closely and were impressed with the quality and integrity of what they were doing” at Make School. 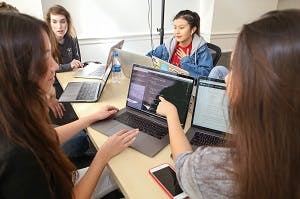 Make School has ties with major tech and Silicon Valley companies. The eight program-major instructors and the mentors, curriculum advisers and guest speakers come from some of the most recognized companies, including Lyft, LinkedIn and Facebook.

Desai said the Make Schools finance model can boost diversity in science and tech fields by removing the burdensome educational debt that discourages many students, disproportionately those in underrepresented groups, from taking risks such as accepting a lower-paying job in a start-up tech company that could become highly lucrative.

Make School also has several initiatives to support communities and students from diverse backgrounds. For example, it has worked with the Thurgood Marshall College Fund over the last several years to help students learn computer coding and to help HBCU students train for internships at tech companies, said Desai.

Drake “Ki” Vorndran of Indian Harbour Beach, Florida, finished his second term at Make School in December. He said he likes the consistent team and individual projects, friendly and supportive faculty, industry connections, the mentoring and weekly meetings with an academic coach.

“I didn’t think it was going to be as relevant to the industry as it is. It’s been incredible,” said Vorndran, who just turned 19 and plans to become a front-end web developer.

His mother, Deb, said the income-share agreement is a boon for their single-parent household. When her son found Make School online, it seemed “too good to be true,” she said. “I kept digging for a down side and was sure there must be one. But the more I dug, the more good things I kept finding.”