Data will become a more important part of problem-solving as America’s urban centers continue to gain a greater share of the U.S. population, and students at Virginia Tech are part of a forward-looking research program that uses data in an interdisciplinary approach to address areas of concern to urban planners, government policymakers and local communities.

Virginia Tech created UrbComp, a 12-credit urban computing graduate certificate program, to train students to become interdisciplinary and ethical data scientists who will help society cope with problems that will become more complex in areas from transportation to epidemiology as more American cities grow into vast metropolitan areas over the next 20 years. 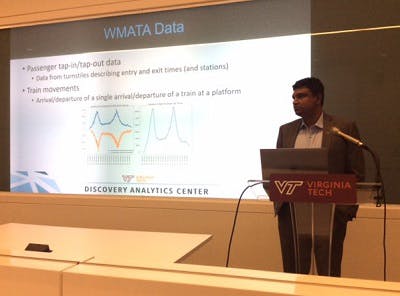 Now in its fourth year, UrbComp has nine National Science Foundation fellows working with one academic adviser in each of two fields – a “horizontal” discipline such as computer science, math or statistics and a “vertical” discipline such as epidemiology, transportation or urban planning.

The purpose is to get them thinking and collaborating across disciplines and departments to broaden their knowledge bases and thinking as they partner with government and industry to solve problems using data.

At a presentation Thursday titled “Behind the Algorithm: Using Data to Solve Urban Challenges,” program director Dr. Naren Ramakrishnan described several examples of UrbComp projects, such as one that helped the Washington Metropolitan Area Transit Authority better allocate resources and improve service by using data to predict on-time performance of its trains through real-time forecasting.

Another UrbComp project involved mapping Tweets and mining social media data in other ways to understand WMATA service disruptions in real time, while another analyzed how to prevent implicit prejudices within complex crime data and bias in how the data is applied.

“It needs to be a really data-driven approach,” said Ramakrishnan, the Thomas L. Phillips Professor of Engineering. “What has really been useful is a lot of organizations either do not have data or the capacity to work it. So, a collaborator right here in the region, and the partnership, is helpful. Students and partners win. Students come up with real solutions to their problems.”

UrbComp features two electives and two core courses, Introduction to Urban Computing and Ethics and Professionalism in Data Science. The program is supported by a five-year, $3-million NSF National Research Traineeship grant – one of only 10 such awards across the nation.

However, the university has “tried to build a sustainable program” by taking steps to ensure that it continues when grant funding is no longer available, said program coordinator Wanawsha Hawrami.

The program is administered through the university’s four Discovery Analytics Centers – which are funded by multiple federal and industry sponsors – where 90 Ph.D. students, 16 academic faculty and six research faculty focus on big data analytics and knowledge discovery in areas such as intelligence, health, sustainability and urban computing under the directorship of Ramakrishnan.

There are few programs like UrbComp. Similar in theory are New York University’s Center for Urban Science and Progress (CUSP) and the University of Chicago’s Urban Center for Computation and Data (UrbanCCD).

The current UrbComp fellows are a culturally diverse group of nine men and women in master’s or doctoral programs. In addition to their academic degree, they will earn a graduate certificate in urban computing.

Two other fellows have graduated. Dr. Gloria Kang, a population health sciences student, is a postdoctoral fellow at the Centers for Disease Control and Prevention while Dr. Huthaifa Ashqar, who studied civil and environmental engineering, is a transportation analyst for Booz Allen Hamilton.

UrbComp got Davon Woodard’s attention when he was looking for a postgraduate program to enter after graduating from DePaul University with a master’s degree in economics and an MBA in analytics.

“This program and Virginia Tech stood out as one of the few in the nation that could give me the training I wanted in order to merge my degrees,” said Woodard, a second-year Ph.D. student in an urban planning field called Planning, Governance and Globalization. “It has given me the depth of the technical aspects, but also a breadth in terms of the social impact of the computer science and analytics aspects so that I understand the impacts that my decisions and my research will have on communities. It helps me have more in-depth conversations across the university and across majors as I talk to different people.”

Nikhil Muralidhar said his work on several UrbComp projects has provided him an appreciation for interdisciplinary research – computer science and electrical engineering – and valuable collaborations with partners such as NEC Laboratories America and HP Labs in California.

And having equally committed academic advisers from two different fields has been valuable because “it makes sure your research problem is being thought about from two perspectives,” added Muralidhar, a third-year Ph.D. student.

“It broadens your horizons by giving you the opportunity to think about a problem from a different perspective that you might not have thought about otherwise,” he added. “As a function of the collaborative outlook, you get to meet a lot of people from different fields. It helps you understand different ways of solving problems, and that’s sort of how research is pushed forward.”