Tiffany Pennamon
Mar 13, 2019
The University of the District of Columbia (UDC)’s Center for Urban Agriculture and Gardening Education (CUAGE) has taken a collaborative approach to addressing food deserts in the surrounding metropolitan area. Through community programs and the launch of several urban food hubs, the university has empowered thousands of residents with the knowledge and gardening techniques to improve their food and water security. 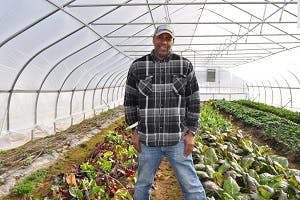 CUAGE’s community outreach is just one example of the ways historically Black colleges and universities (HBCUs) play an active role in promoting food and environmental sustainability. Such community collaboration can reacquaint land grant HBCUs with their traditional mission of teaching and providing experiential opportunities around land and water management, said Mchezaji “Che” Axum, director of the Center for Urban Agriculture and Gardening Education in the College of Agriculture Urban Sustainability and Environmental Sciences.

“When we do establish these food hubs … it invigorates the community,” Axum said. “People are really excited and really look forward to learning more about growing and tasting produce for the first time.”

CUAGE’s five food hubs include the Firebird Research Farm in Beltsville, Maryland, the Bertie Backus Urban Food Hub in D.C. and the Van Ness Urban Food Hub on UDC’s main campus. The Firebird Research Farm’s aquaponics systems allow growers to cultivate fish, grow a range of vegetables and filter and recycle the water in a self-sustaining system that uses fish waste as fertilizer for plants.

In addition to aquaponic and hydroponic systems, a demonstration kitchen and garden beds for community use, the Bertie Backus Urban Food Hub hosts a native plant nursery that teaches community members job skills in greenhouse management and plant production. Moreover, students and residents learn about food safety and nutrition as part of the demonstration kitchen, which also serves as a business incubator, according to the center.

Some folks have never eaten a tomato or cucumber right off the vine, Axum added, noting that this can be “life-changing” experience that some will never forget.

The impact of initiatives coming out of UDC’s College of Agriculture, Urban Sustainability and Environmental Sciences is widespread.

And because some students experience food insecurity at UDC, CUAGE also provides food resources to students through a food pantry, Axum said.

Partnerships between community gardens and campus food pantries have been established at other HBCUs to tackle food insecurity and food deserts.

Paul Quinn College, a Dallas-based HBCU, transformed its football field into a farm.

At Tuskegee University, officials recently relaunched the institution’s “Tiger’s Den” food pantry, an initiative originally developed by a student in the political science department. The Tuskegee Wesley community garden – developed in 2018 on a 25-by-25 foot plot of land provided by the university’s College of Agriculture, Environment and Nutrition Sciences (CAENS) – is now in the process of partnering with the university’s food pantry. 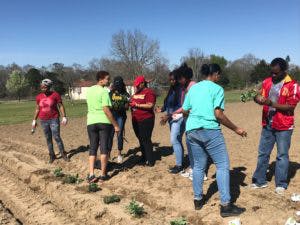 Last year after its first harvest, the Wesley Garden donated 50 pounds of fresh produce to university students and 170 pounds of fresh produce to the Macon County Food Bank. The region that Tuskegee is in has only one major grocery store that residents can go to, making the area a food desert, Reverend Audrey Rodgers, director of the Tuskegee University Wesley Foundation, said.

The goal of the garden is not only to fight food insecurity, but it provides students with an opportunity to engage the Christian text as it relates to environmental and biblical stewardship, Rodgers added. In a Bible study in 2017, for instance, students discussed what it meant to be a “good steward of God’s land and resources,” Rodgers said.

Students meet with Rodgers every Tuesday evening for Bible study and they also receive a well-balanced meal including fresh fruits.

“It’s become a really great ministry for the students,” Rodgers said, reflecting on Tuskegee founder Booker T. Washington’s vision for the university to be self-sustaining entity.

In the broader fight for access to quality and nutritious foods, Rodgers said it will have to take universities, churches, the government, businesses and every segment of the community working together to demand food justice.

“The way we can answer food justice is everybody playing a role” and utilizing the resources they can provide, she said.