PRAIRIE VIEW, Texas— Explaining the dual role of Black women as feminists and civil rights activists throughout American history was at the core of a symposium held on Friday that focused on the intersectionality of Women’s Studies and African American Studies at Prairie View A&M University.

“What is our history as Black women? Do we have a history of our own,” author and historian Paula Giddings recalls asking herself more than 35 years ago upon writing her groundbreaking book When and Where I Enter: The Impact of Black Women on Race and Sex in America. “If we have one, let me find it. That was the beginning of my intellectual journey,” Giddings told a crowd at PVAMU’s student center for the symposium honoring her work. 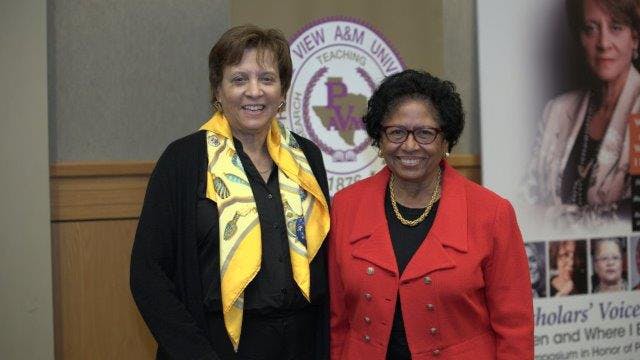 Weems, a biblical scholar and feminist teacher, said Giddings’s book was a much needed resource for her as she embarked on her research.

“Judeo Christian text has shaped American politics and civilization. I became a scholar without knowing the ways Black women used it to shape and expand their reality,” said Weems who has held teaching and administrative posts at Spelman College, Vanderbilt University and American Baptist College. “I was a church girl on Sundays and a feminist during the week,” Weems said of her activism.

At the symposium, scholars said that there is a need to provide an accurate history of the women’s movement.

“We need to get rid of some of the myths that the movement was White and focused on gender issues,” said Guy-Sheftall, who is the founding director of the Women’s Research and Resource Center and the Anna Julia Cooper Professor of Women’s Studies at Spelman College. “Secondly, we need to figure out why the movement got to be considered White.”

Steinem said that while working as a journalist during the 1960s and ‘70s, she would cover talks about abortion issues that usually included all White males and Catholic nuns. She said that polls in those days overwhelmingly showed that 60% of Black women were on board with feminist issues while only about 30 percent of White women identified with feminist issues.

“All you have to do is look at the vote in the latest election,” she said. “When I began to speak nationally at events with Black feminists, the reporters would always ask me about feminist issues and ask my Black counterpart about civil rights issues. It happened every time. By declaring the movement as White, you are declaring Black women invisible.”

Giddings explained that one of the reasons the American feminist movement is largely consider a White movement is because of the Seneca Falls (New York) Convention in 1848, where the only Black person invited to attend was author and abolitionist Frederick Douglass.

“Then you have the big movements in the 1960s and 70s. There was an integrational, transnational women’s movement by Black women as well,” Giddings said. “The reason we didn’t know this is because of the McCarthy period. People were afraid to speak out and it certainly erased the Black women who were leaders, people like Claudia Jones who was deported because she was so radical.”

Giddings said it is time to rethink and reframe “and look at history from a different perspective.”

Guy-Sheftall agrees: “It is time for us to write a totally revisionist history and get rid of some of the myths,” she said.

“First, to have Paula Giddings on campus to expose her work on the lives of Black women in terms of political activism and political resistance is a big win for our institution,” said Price. “Then, to have people who are also huge in their fields to come and talk about her work and their work and the way they have changed the way we study Black women in the academy is historical as well.”

Dr. James A. Wilson Jr., associate provost for Academic Affairs at PVAMU said that the day-long event which concluded with a conversation between Giddings and PVAMU president Dr. Ruth J. Simmons was instructive and needed.

“We have so much to learn from each of these women whose collective work as writers, journalists, activists, teachers, and lecturers has helped usher in advancements for all women and influenced generations of young women to embrace their power and use their voices to speak out against injustice,” said Wilson.