When Dr. Kabria Baumgartner went to the University of Massachusetts Amherst to earn her Ph.D., she thought she was going to study 20th century African diasporic literature.

Then she took a seminar on early African American history, and she found herself fascinated by a different time period altogether. It led her to the research she does today on free African Americans in the 18th and 19th centuries.

She found that the North wasn’t the “beacon of racial equality” she expected, which only pushed her to delve deeper. 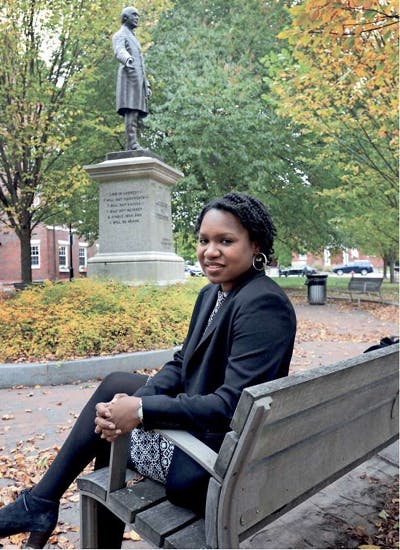 “It’s part of the learning process,” she says. “You come to it sometimes with assumptions, and you realize ‘Wait, those assumptions are wrong. I need to study more and learn more.’ And then it sort of enlightens you. To me, that’s fun.”

That attitude undergirds her work as an assistant professor of American studies at the University of New Hampshire, where she focuses on gender, race and education in the American antebellum Northeast.

In her first book — In Pursuit of Knowledge: Black Women and Educational Activism in Antebellum America — she studied some of the earliest school desegregation cases. She saw that her assumptions about who these women became and what forces shaped them weren’t always what she thought they would be.

For example, she recently wrote an article on Sarah C. Roberts, a child who had a desegregation lawsuit filed on her behalf in 1850. Baumgartner investigated her life, hoping to see “this activism at an early age propel her down an educational path,” but Roberts seemingly stayed away from public activism as she grew up.

In that story and others, Baumgartner found limits to education.

Her work also explores some of the challenges of researching the early lives of African American women and children through archives. Her book took about ten years, in part because there’s “no folder you can go to, no collection oftentimes” that’s simply labeled ‘African American education,’ she says. Sometimes she feels like a “detective,” hunting down sources from different archives, but for her, “there’s fun in that too.”

In general, when Baumgartner hits obstacles in academia — like hard-to-find sources, a difficult class or a paper to revise and resubmit — she likes to remind herself of “the privilege” of being a university professor.

This upbeat approach fits in with how others view her as a scholar. Dr. Wayne Jones Jr., the provost at the University of New Hampshire, described her as having a positive energy about her that encourages her colleagues to collaborate with her.

Jones sees Baumgartner as someone crossing the boundaries between history, women’s studies and African American studies. He also praised her work as a faculty representative on an interdisciplinary think tank to create the Postdoctoral Diversity and Innovation Scholars program, which seeks to increase minority representation among tenured faculty at the University of New Hampshire.

Words of wisdom/advice for new faculty members: “Celebrate important milestones. Academia does come with rejection, critique, that’s par for the course. But I think there are moments in which we need to celebrate our success. And we probably ought to be grateful and thankful as faculty that we have this kind of position.”