Dr. Miltonette Craig, an assistant professor of criminal justice sciences at Illinois State University, wants to know why police violence happens and how officers justify racially biased incidents to themselves and others.

When Craig was a student at Georgia State University’s College of Law, she says she learned to ask, “What do law books say and how do we put this into practice?” But it wasn’t until she went back to school to study criminal justice that she got to ask deeper questions prompted by her time in court, such as “Why does crime happen? Who makes the law? How do we respond to crime when it happens?”

After she earned her law degree, she worked in the Florida court system  for three years, first as a law librarian, then as a judicial assistant and, finally, as a law clerk. Wanting to explore the gender and racial patterns she had witnessed, Craig went on to earn her master’s at Florida International University. Then, an adjunct teaching position at Nova Southeastern University inspired her to earn her Ph.D. at Florida State University. There, she participated in the Florida Education Fund’s McKnight Doctoral Fellowship for minority Ph.D. students, which offered professional development, mentorship 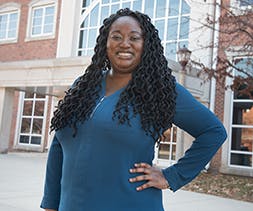 and a sense of community. She joined the faculty at Illinois State University in 2018.

Craig’s dissertation research focused on police in Missouri. There, police agencies are required to file a report on the demographics of whom they’ve stopped – with the option to submit an explanation for why their numbers look the way they do, often with minorities overrepresented. Craig mined those explanations for qualitative data and came across “racially coded language” and rationales that were “outright offensive,” she says.

Oftentimes she found herself thinking, “Oh my god, they put this in a government document?”

Her next project will explore publicly available complaints against police in Philadelphia.

Craig says her scholarship — which focuses on police-community relations and the criminal justice system — is personal, sometimes painful.

When she reads the data, she can feel “emotionally attached to it, especially as a person identifying as African American,” she says. “It kind of just solidifies that at any point we could be subject to a police stop that doesn’t go well at all.”

But she values the opportunity to add to the literature on police bias and to influence policy.

“Yes, there’s a lot of racial profiling data,” she says. “But I don’t think there could ever be too much until significant changes are made.”

She hopes those changes will include “deeper, more substantive” diversity training for police, more diverse police agencies and a “community policing approach” where the main goal is to “protect and serve.”

In addition to her research, Craig has been working with the local drug court in McLean County to improve its outcomes for African American men in the drug court program. At its request, she’s looking into why minorities are less likely to be admitted and to complete these programs and what can be done to increase the success rate.

Craig is also known for her teaching. She won an “Impact Award” at Illinois State University that requires a student nominator.

Dr. Brent Teasdale, chair of the criminal justice sciences department, describes her as a “testament to the impacts we can have without knowing that we’re having them – that’s how she is with our students.”

Teasdale reads every student course evaluation and noticed that more than once Craig has been singled out as a favorite instructor.

“She’s an excellent scholar, she’s an outstanding teacher, she really cares about all our students,” he said.

Words of wisdom/advice for new faculty members: “… Adding diversity to the way you teach is important. Using different texts and authors that show other points of view, and especially as it relates to criminal justice, showing these current events that are very racially charged to evoke discussion … Be diligent, and stand by your craft as much as possible.”