A new report from the Georgetown University Center on Education and the Workforce (CEW) measures the costs of free-college models, including the plan proposed by Democratic presidential candidate Joe Biden. 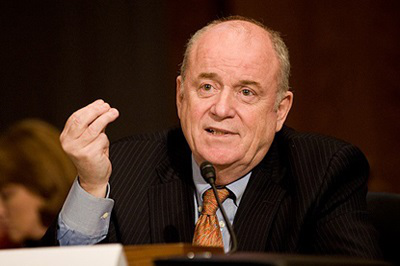 Increasing access to higher education has long been a political talking point, says Dr. Anthony P. Carnevale, lead author of the CEW report issued Tuesday titled, “The Dollars and Sense of Free College.” While the costs can be high, the report notes that the annual benefits of free public college would exceed the annual costs of the program within a decade.

Biden’s plan proposes that eligibility would be limited to students at four-year colleges whose annual family income is less than $125,000. This “free-college” program would cover public college tuition, and existing financial aid could be used for other attendance-related expenses, such as housing and textbooks. In its first year, Biden’s plan would cost $49.6 billion. Over 10 years, the cost would total $683.1 billion.

CEW researchers, who examined different ways of applying the free-college concept, project that free-college programs could yield a return of $1.2 trillion within the first 11 years. With college degrees and other credentials in hand, graduates would secure better paying jobs and pay more in income tax. There would also be noneconomic benefits such as improved health and reduced crime. 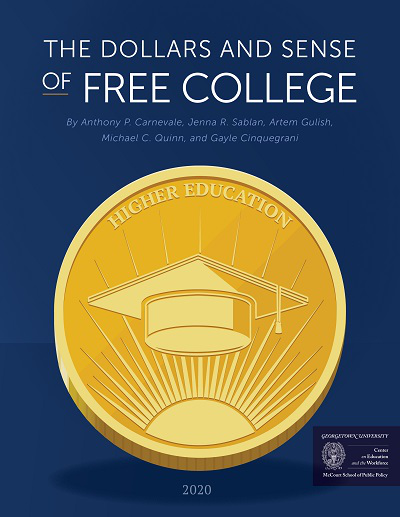 At least 15 states and more than 200 localities have a variety of free-college programs. The cost of free-college varies from state to state, but most proposed scenarios involve the states working with the federal government. The general model would have the states contributing $1 for every $2 from the federal government, but there are a number of ways this can be designed.

“The federal government will set standards and demand transparency in outcomes for students and demand that those outcomes be reported to new students,” said Carnevale.

“I think there will be an immediate increase … in minority students in attending,” said Carnevale. “A lot of them already do attend, but they don’t graduate. The other question is to what extent will this money help them stay on and graduate, and the Biden plan does that to an extent.”

For example, if a student receives a $6,000 Pell Grant, the government would pay the entire tuition bill, leaving the $6,000 in grant aid for food, housing and other expenses.

“In the end, you get money in your pocket, and I think that will be the crucial issue for lower-income students,” Carnevale.

CEW researchers project up to a 14% enrollment increase at public colleges. One noted flaw in most free-college proposals is that they don’t include projections for the costs of hiring additional support staff and developing support services to meet the needs of these new students.

Dr. Berenecea Johnson Eanes, president of York College, a four-year institution in the City University of New York (CUNY) system, said any program that provides York students with more access to education is wonderful, but it will require thoughtful examination, planning and execution.

“The infrastructure that is needed to support any group of students is the constant work of an institution itself,” said Eanes. “Based on your enrollment, based on how your demographics change, based on how your curriculum changes, it is an ever-changing piece of the work.”

Open-access institutions are projected to see the greatest increase in enrollment — as much as 19% — under a free-college program, yet, according to Carnevale, one “tragic flaw in all these programs” is that that they “are essentially built for full-time students — not necessarily part-time community college” students.

“Even in states where community college is free, it doesn’t really cover part-time students,” he added. “In order to get federal aid and even state aid, you have to be making ‘annual progress.’ If you’re only taking two classes, you won’t be eligible for the aid because that’s not enough progress toward a degree. Part-time students are still underserved.”

Dr. Christine Mangino, president of Queensborough Community College (also part of CUNY), applauds Biden’s plan. “To be able to provide students a free education while giving them the opportunity to use some of their Pell money to help their outside-of-class expenses is great,” she said.

Mangino said if students can use their Pell grant money for other expenses besides tuition, perhaps they will be able to work fewer hours and take more credits. “It’s not just for recent high school graduates so it is helping to look at the adult learner,” said Mangino.

A recent CUNY survey of students showed about 28% said they couldn’t take more than 12 credits per semester because they had to work.

“If they had money, they wouldn’t have to be working as many hours and they could take 15 credits,” Mangino said. “They would then graduate in a two-year time period. Eleven percent also said they didn’t take extra credits because they couldn’t afford it.

The Biden plan does not address returning students who may have outstanding student loans. Senators Elizabeth Warren and Bernie Sanders have advocated for loan forgiveness. For those without unpaid debt, Carnevale said free college in theory makes it easier for students to return, but issues such as child care and class scheduling remain an issue.