Relatively new to a full-time career in academe, Dr. Kendrick B. Davis was named chief research officer and associate professor of research at the University of Southern California’s (USC) Race and Equity Center in November. The appointment brings Davis’ work — particularly in the arena of public policy as well as science, technology, engineering and mathematics (STEM) — full circle.

Though his appointment at USC is largely an administrative one, Davis will do some teaching from time to time in the university’s Rossier School of Education and the Sol Price School of Public Policy. 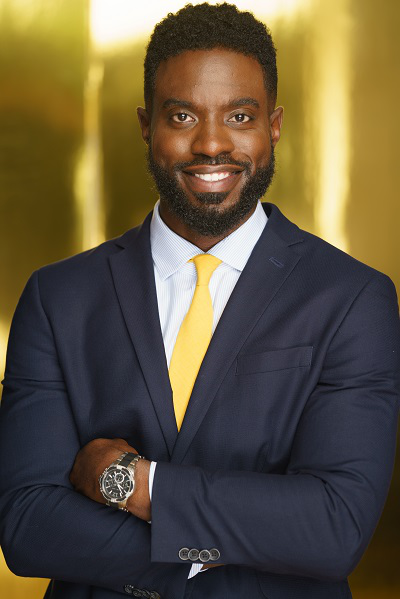 The job seems to be the perfect fit for the Pittsburgh native whose career has included directing STEM initiatives for the School District of Philadelphia, serving as a vice president for research and policy at the Campaign for College Opportunity and as a policy aide to Vice President Kamala Harris when she was a U.S. senator.

Along the way, the 33-year-old Temple University graduate earned two master’s degrees and a Ph.D. in higher education from the University of Pennsylvania, where his dissertation, “Re-Engineering Risk: A Portraiture of Black Undergraduate Engineering Persistence in Higher Education,” was completed under the faculty mentorship of Dr. Shaun R. Harper, who left Penn for USC in 2017 to become the Clifford and Betty Allen Professor and the founder and executive director of the USC Race and Equity Center.

“Professor Davis is a prolific scholar who has already had an enormous impact on K-12 schools and higher education,” says Harper, who hails Davis’ work in leading anti-poverty and racial equity STEM initiatives in the nation’s fifth-largest city. “More specifically, he used data, brokered new partnerships and created innovative programs to diversify and expand the STEM pipeline. A national STEM mentoring program he implemented in the mayor’s office stimulated a significant increase in the number of Black high school students enrolling in college and pursuing STEM degrees.”

As Davis was completing his Ph.D. and Master’s in Law degrees from Penn in a record four years, he was also contemplating his options. Would he go the tenure-track route or hone his research skills at a nonprofit?

“I was only going to apply to things that really resonated with me,” he recalls in an interview with Diverse. “Somehow you get to the pinnacle of academic success, you get your Ph.D. and then there’s this idea that you’re supposed to go to wherever someone will take you. I categorically reject that idea and always have.”

Davis came across a Congressional fellowship sponsored by the American Association for the Advancement of Science and was accepted, landing a one-year position as a policy advisor to then-Senator Kamala Harris. In this role, Davis was responsible for advising Harris and her leadership team on K-12, higher education, STEM and labor issues. He assisted on bills and secured co-sponsors for proposed legislation on student debt, discipline reform, and chronic absenteeism and truancy.

“D.C. during Trump was a different experience,” says Davis, adding that he needed a reprieve from the nation’s capital but didn’t want to leave the policy space. He ultimately headed to Los Angeles to accept a role in 2019 at the Campaign for College Opportunity.

“That was not a good fit,” he says of the position, leaving the position several months later to relax, recoup and contemplate his future trajectory. “And honestly, during that time, there were periods that I was like, ‘I’ll never do education research again. I don’t have the energy for this.’ But I had a chance to sit with it and revisit those thoughts and decided that I was going to start my own consulting company and that I would have to show myself how to do the work that other people didn’t know how to do.”

After starting his consulting firm, Harper called and offered him the inaugural chief research officer role within his burgeoning center. In this new role, Davis will manage more than $4 million in funded research projects and facilitate interdisciplinary collaboration and research projects funded by federal and private foundation grants.

“Having earned his Ph.D. just two years ago, Kendrick Davis is clearly emerging as one of our nation’s most influential researchers and leaders in higher education,” says Harper.

Words of wisdom/advice for new faculty members: “It’s best to learn what things can be done within the academy and what things necessarily must be done outside of the academy.”