Dr. Brian Harper, chief medical officer and associate professor at the New York Institute of Technology, has taken on yet another role: that of the school’s first vice president for equity and inclusion. 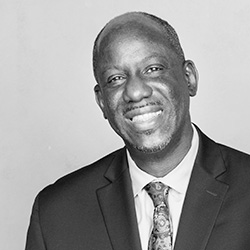 In the position, Harper will create a new office to focus on and address matters of diversity, equity and inclusion (DEI). Harper had served as a co-chair of a New York Tech DEI task force before New York Institute of Technology President Dr. Hank Foley tapped him to serve in this new capacity.

“Through his vast experience and impressive public health advocacy, Dr. Harper’s leadership has been a key driver in the success of New York Tech’s Diversity, Equity, and Inclusion Task Force,” Foley wrote in an email. “The strength of our institution lies within its ability to encourage and foster a diverse mosaic of perspectives. I look forward to working with Dr. Harper in his new role to continue building an environment where individuals of all races, ethnicities, and backgrounds can thrive.”

Harper will continue to operate as chief medical officer and associate professor.

Originally from Brooklyn, Harper studied at Brown University, earning his undergraduate degrees in biology and in Afro-American studies. He then went on to the State University of New York, Health Science Center at Syracuse for his medical degree.

“After Syracuse, I came back to New York and I started off at Harlem Hospital, again with some understanding that there was really a need for physicians, particularly in some of the urban areas,” Harper said.

But treating patients at Harlem felt a bit cyclical, he added.

“I quickly realized that taking care of the individual patients, it was almost like a revolving door,” Harper said. “You would do what you could for the patient, and you would have a reasonable hospital outcome so that you would improve on the patient’s health.

“But once they returned back to the community and back to the environment that caused them to become ill, it would just be a matter of time before they would return back to the hospital.”

This realization spurred Harper into pursuing policy-related issues and preventive medicine, leading to his master’s in public health from Columbia University and redirecting his career path toward public health.

Harper went on to serve as director of the Bureau of HIV Services for the Nassau County Department of Health for approximately 10 years, then senior vice president of community affairs at the Nassau University Medical Center.

Afterwards, he became the first African American commissioner of health for Suffolk County in New York and chief operating officer and medical director of the Ralph Lauren Center for Cancer Care and Prevention before arriving at New York Tech as its medical director in 2012.

As he takes on this new position, Harper has two goals: educating the entire campus community on DEI issues and conducting a survey to learn about specific concerns and perspectives about New York Tech on matters of DEI.

Central to his efforts is his belief that DEI needs to be institutionalized.

“We have to institutionalize this,” Harper said. “This is not going to be a program in which you just have some annual diversity in-service and then we call it a day for the year.

“Ultimately, we would like to institute this, such that all departments and all the colleges take on diversity, equity and inclusion as something that they incorporate as a matter of routine into their operations.”

Harper wants to ensure that the campus is aware of his new office and what it offers.

“I want to make sure that people are comfortable with me personally and my background and to understand that, for me, it’s not just another administrative job,” Harper said. “This is something that’s very personal to me, to make sure that we address all of these issues.

“I like to say that I was a Black person in the U.S., an African American, before Black Lives Matter. So I remember vividly a lot of instances of discrimination throughout the course of my career. And I understand that these issues are real.”

He hopes to create a campus culture where the strengths of people from different backgrounds are acknowledged.

“I think diversity is really a strength for an institution because everyone brings a certain perspective,” Harper said. “And if we take all of this into consideration, we’ll just ultimately be a strong institution.

“So I’m hoping that this will actually be a microcosm for what can be done nationwide. As opposed to fighting amongst each other, we take all of it, the strong points of each culture, and move forward.”