Nzinga Mack grew up with anatomy and physiology textbooks lying around the house. She had older siblings working in medicine. From an early age, she thumbed through the pages, fascinated.

She thought she would become a doctor too, but she ultimately fell in love with research.

Now Mack is completing a Ph.D. program in Florida A&M University’s College of Pharmacy and 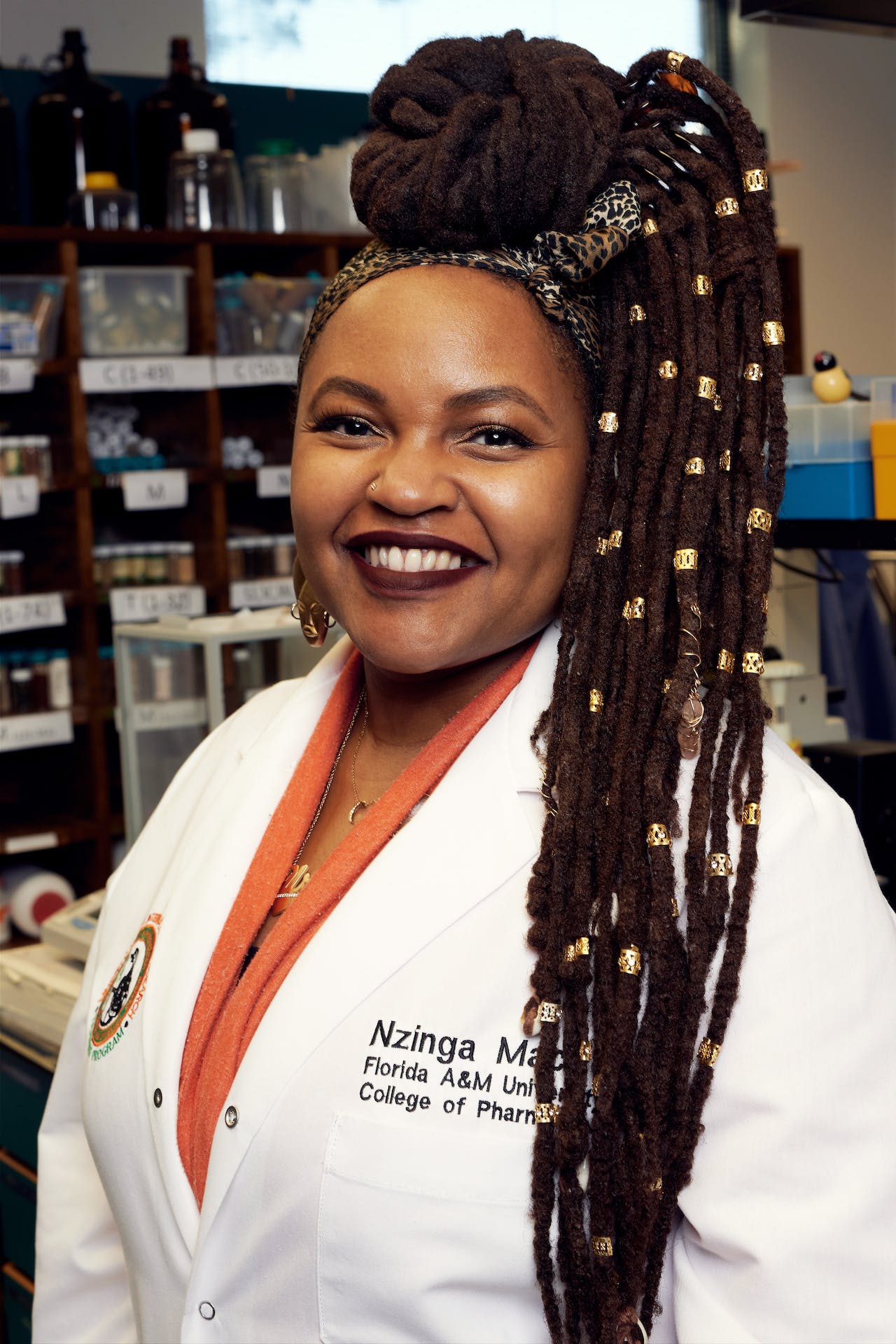 Pharmaceutical Sciences. In the spring, she’ll start a postdoctoral fellowship sponsored by the National Institute of Health at Johns Hopkins University, called Academic Success via Postdoctoral Independence in Research and Education (ASPIRE).

Mack’s research focuses on a particular gene, lactate dehydrogenase, which plays a role in a variety of cancers. It produces lactic acid, which degrades tissue around the cancer making it easier for cancer to spread. It also changes proteins on the outside of the cell, making it harder for the body to recognize and kill the cancer cells. Mack’s work involves gene editing to “knock down” the expression of the gene producing the lactic acid.

The project was born out of an academic interest but also inspired by family members who struggled with cancer. She’s been “personally touched” by what she studies, she says.

Mack has already seen her work inspire further research. One of her published articles has been cited 24 times, including by a clinical study. Her findings have also led pharmaceutical companies to look for drugs that would inhibit lactate dehydrogenase.

“A lot of times, when you’re in the lab and it’s two in the morning and you’re tired, you don’t really think that your work is going to impact anybody,” she says. “You’re just kind of grinding through everything, problem solving, things aren’t working the way that they should. And then you do it two, three, four times, and it finally works. And then you’re like, ‘Ok, let me publish it. No one is really going to see it.’ But then you actually see the fruits of your labor, and that’s an amazing feeling.”

In the long term, Mack wants her career to contribute to combating racial health disparities. When she first started learning about the extent of the gaps, she was “stunned.”

“I thought science was science,” she says. “I thought medicine was medicine. I felt very naïve. … [But] there are people doing science. There are people who are providing the medical care, and yes, people bring all of their biases, unconscious and conscious, with them.”

For her, combating racial health disparities means not only studying them but training a new generation of more diverse healthcare professionals. For 15 years, she’s been an instructor at Kaplan Test Prep, teaching an MCAT preparation class at no cost to students so they can have “equal access” and “equal guidance” to succeed.

Her dream is “getting more physicians into the general population who look like some of the populations they will eventually serve,” she said, and she’s watching it happen. She’s taught “thousands of students” at this point and watched them go on to medical schools and residencies.

Her mentorship is partly inspired by the mentorship she received at two historically Black universities, and she wants to see HBCUs “nurtured and supported,” she says. “The attention that HBCUs give to providing for the unique needs of their student population is singular and unparalleled,” she said. “I know for a fact that there would be no possibility of a Dr. Nzinga Mack without Florida A&M University.”