Saddled with multiple lawsuits and a looming financial audit, questions about the financial health of the historically Black university have swirled around Brown, who took the helm of the public institution in 2017. 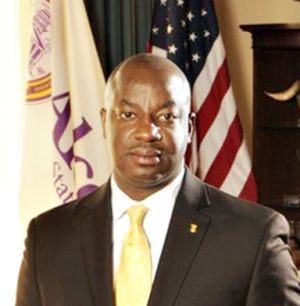 Brown’s resignation came during a special meeting Tuesday and was presented in a form of a letter addressed to Kentucky Board of Regents Chair Elaine Farris.

“Dear Regent Farris, I have decided to tender my resignation as president of Kentucky State University to you and to the Board of Regents,” the letter read. “I have recently learned I will be unable to complete the tenure of the third addendum of my present contract.”

Brown did not give a reason why he decided to leave his post before his contract, which was renewed through 2025 back in May, expired.

“I am most proud of our institutional achievements in student enrollment, significant growth in student retention, doubling the graduation rate and the recognizable brand identity of the green and gold Throbreds,” he wrote in the resignation letter. “It has been an honor and a pleasure to work with the students, alumni, faculty, staff, board and stakeholders of Kentucky State University. I wish the Thorobred family continued progress onward, upward and forward.”

Dr. Aaron Thompson, president of the Kentucky Council on Postsecondary Education, the state’s coordinating board for higher education, said that his agency “is poised and ready to provide our assistance to the leadership of Kentucky State University as they move forward.”

“KSU is vitally important to our higher education landscape as our state’s only public historically Black university, and as such, we are committed to its unequivocal success,” said Thompson, who served as interim president before Brown was hired.

Clara Ross Stamps, senior vice president for brand identity an university relations was named acting president and a presidential search is set to commence in September. The board also approved the hiring of an auditor to review the school’s financial status.

“As the Kentucky State University community comes together, with a renewed appreciation for our collegiate campus atmosphere and a commitment to our core mission and values, I am humbled and energized by the opportunity to serve our students and community following what has certainly been a time of unprecedented change,” said Stamps. “I pledge to labor with our faculty, staff, alumni, and supporters, and will be accessible, transparent, accountable, and communicative, so together we can positively impact the lives of our students and society while advancing Kentucky State onward and upward.”

The office of Kentucky Gov. Andy Beshear said that several members of the KSU board had reached out to the administration about “concerns related to Kentucky State University.”

The school has a $71 million budget, $27 million from the Kentucky’s General Fund. The university also recently began moving ahead with a $50 million project to build a 400-bed dormitory and dining hall that was approved by the state legislature, according to the Lexington Herald-Leader. Brown testified that the college was paying $3.4 million per year to house several hundred students off-campus.

In December 2013, Brown resigned as president of Alcorn State University amid a state investigation into university purchasing practices. Prior to being hired at KSU, he served as provost and executive vice president for academic affairs for the Southern University System in Louisiana.