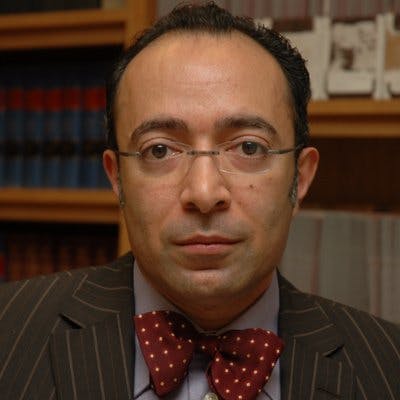 Barmak Nassirian, vice president for higher education policy at Veterans Education SuccessThis week, the U.S. Department of Education launched its first round of negotiations to regulate some of the biggest student loan problems that could impact millions. The agenda items under debate include strengthening the Public Service Loan Forgiveness (PSLF) program as well as discharging student debt for people defrauded by institutions.

“Every one of the issues on the table is critically important and quite consequential for specific segments of the borrower population,” said Barmak Nassirian, vice president for higher education policy at Veterans Education Success, a bipartisan advocacy group that focuses on higher education for veterans, service members, and military families.

But beyond policy think tanks and advocacy groups, this process, which is called negotiated rulemaking (or neg reg), is not well-known. This year, however, some experts say neg reg has higher stakes as well as greater potential for achieving higher education reform as Congress continues to stall and the Biden-Harris administration looks to act.

“We’re at a time when there is so little legislation happening in Congress for higher education,” said Dr. Rebecca Natow, an assistant professor of specialized programs in education at Hofstra University. “So, a lot of the policymaking happens through rulemaking, not Congress. And the Department of Education's regulations have a lot of influence on what happens to students and student loan borrowers.”

Natow has researched negotiated rulemaking and explained how the Department of Education procedure works. Over a few months for several days at a time, the Department of Education discusses proposed regulations issue by issue with relevant stakeholders. They can include people who represent students, state governments, and different kinds of higher education institutions.

“The goal is to reach consensus on what a Notice of Proposed Rulemaking, or NPRM, will say,” said Natow, adding that this notice after neg reg goes in the federal register and out for public comment.

Yet reaching consensus during neg reg can be rare. If everyone does not agree, the Department of Education can write the proposed regulation on its own.

“So, the Department has a huge amount of power here,” said Natow. “They are the negotiator. They are the only party that can write the rule in the absence of consensus. Having said that, they do take discussions into account. But they’re not required to use any of the language that was debated unless everyone agrees.”

Nassirian pointed out that one key student loan issue on the table this year is what happens to borrowers when their institutions shut down.

“Education is not a product you can walk away with,” he said. “It is an experience over time. To have a school close can be extremely detrimental to students. We’re not talking about orderly closures that give students prior notice. We’re talking about school doors basically padlocked overnight. The government has both a moral and legal responsibility for what happens to those students.”

Nassirian added that the federal government plays a role in these closures that can leave students still with debt and without a viable degree.

“Every precipitous school closure is the failure of our government,” he said. “Institutions need to be financially stable to take financial aid or GI Bill money. And the Department of Education is responsible for confirming these are financially healthy institutions. So, every time an institution closes overnight, yes, there was something wrong with the institution. But I got news for you: there was something wrong with the Department of Education to have let them in.”

Another issue that has received attention during neg reg is the chance to create a new income-driven repayment (IDR) plan for student loans. Monthly payments could be cut down from around 10% to 5% to help borrowers that do not earn enough to pay back their debt.

“We hear from a lot of borrowers that they can’t afford the monthly payment — or even if they can, they can’t afford the interest, and so their balance is still growing,” said Michele Streeter, associate director of policy and advocacy at The Institute for College Access & Success (TICAS), a nonprofit organization that researches higher education equity and affordability.

In addition, Streeter said the timeline for debt forgiveness in IDR plans can be about 20 to 25 years currently. Advocates like her seek to push for shorter timelines during neg reg.

“Some of the big conversations are around how do we make sure that the borrowers that need the most help have access not only to the monthly relief but are not saddled with the loan for 20 or so years,” said Streeter.

Both Nassirian and Streeter said they are hopeful about neg reg’s chance to make significant changes. But they added that these items being discussed do not tackle deeper, systemic problems in higher education.

“These issues represent triage after the disaster,” said Nassirian. “What they’re dealing with is what to do when bad things happen. When people get defrauded. When a school collapses on them. But you’re not taking a proactive approach to devise a system that can prevent this from happening from the start.”

If this year’s neg reg wraps up quickly after its final round in December, Nassirian said he then hopes a second negotiated rulemaking will move forward with broader ambitions in the new year. Streeter similarly said she hopes this first round of neg reg is just the start.

“I would hate for the momentum to be lost for broader systemic reform if we do have a new IDR plan,” she said. “That’s not at all what we want to see. Ideally, we’d move completely beyond a debt-financed education system. But as long as we are in one, we want to make sure that no one is having to choose between rent payments and student loan payments. That is really important to us.”