Support Program Aims to be Game-Changer 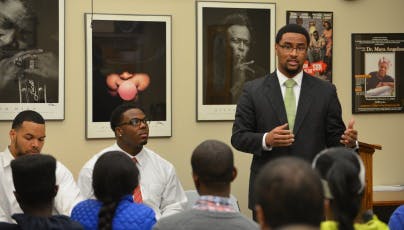 University of Connecticut professor Dr. Joseph Cooper says that some outcomes are a “product of systemic inequalities and the devaluation of educating and preparing Black males for success in life beyond athletic contexts.”

When Black student-athletes arrive on campus on a sports scholarship, it’s a safe bet that their performance in stadiums and arenas will be priority while their education might end up on the sidelines.

Joseph Cooper, an education professor in the Sport Management Program at the University of Connecticut, is on a mission to turn that game around.

He is the founder of a student-athlete group called Collective Uplift, which emphasizes the holistic development of the student, not just what they can do to score points on the field or on the court.

The group meets regularly on campus to give Black male members of the Huskies a safe venue to explore their different roles and their relationship with the university, where Black students represent just 5 percent of the student population.

“It allows you to begin to think more critically about the environment you’re in, the situations you’re in,” said Marquise Vann, who sports the No. 46 jersey as an inside linebacker for the Huskies.

“You don’t have to come here like, ‘Oh, I’m going to the NFL,” Vann said. “That doesn’t have to be the only mindset.”

The group — which features regular rap sessions and guest speakers from different career fields — gives players an opportunity to learn about various resources that are available on campus and to network with individuals from different walks of life.

“There’s many organizations around campus that do some of the same things that Collective Uplift does, but many of them are filled with normal students or students who aren’t football players, so their schedules are more flexible,” said Angelo Pruitt, a recent UConn graduate in economics who is currently training for the NFL draft.

With Collective Uplift, Pruitt said, there’s a certain camaraderie among members who share the same experience and “understand the things we go through.”

Both Pruitt and Vann said they had initially planned to study engineering, but settled on other majors once they discovered that engineering was incompatible with the demands of football. Pruitt studied economics and Vann has an “individualized” major.

In many ways, Collective Uplift is the culmination of years of research that Cooper has done on the unique challenges and circumstances that Black male student-athletes face at predominantly White institutions, or PWIs.

While prior researchers have observed that Black male student-athletes often arrive on campus with lower GPAs, lower college entrance exam scores and less likely to graduate than White student-athletes, Cooper posits that these things are a “product of systemic inequalities and the devaluation of educating and preparing Black males for success in life beyond athletic contexts.”

He believes that Collective Uplift — with its emphasis on a concept he refers to as “Excellence Beyond Athletics,” or EBA — holds promise as a model that can help achieve better academic outcomes on campus at other institutions of higher education.

“Given the uniqueness of Black males’ experiences and position within the U.S. educational pipeline, it is imperative to create programs that are data-driven and grounded in research on this subgroup of students that are intentionally designed to redress the challenges they face and empower them holistically,” Cooper wrote in a recent paper titled “Excellence Beyond Athletics: Best Practices for Enhancing Black Male Student Athletes’ Educational Experiences and Outcomes.”

The paper says the EBA approach consists of six holistic development principles, or HDPs. They are:

The strategies are meant to help Black male student-athletes counter what Cooper says can sometimes be an “exploitative” or “oppressive” system that seeks to capitalize off of their athletic abilities but fails to support them academically.

One doesn’t have to look hard for a contemporary example of such exploitation. Consider, for example, the recent UNC-Chapel Hill scandal in which student-athletes — many of them Black — were steered toward phony classes in the Black studies department.

One of Cooper’s aims is to empower Black male student-athletes to be able to effectively counter such exploitative practices through a “heightened level of consciousness of the various ways this system oppresses them.”

“However, consciousness alone cannot alter one’s position or outcome within a specific context,” Cooper wrote in the EBA paper. “Consciousness must be combined with internalized empowerment and engagement in counteractions in order to enact positive outcomes, particularly within an unjust and inequitable system.”

Cooper said that, despite the exploitative nature of college sports, it’s incumbent upon the athletes to make sure that they gain from the system, too.

“Don’t let the system use you,” Cooper said. “You also need to use the system as well.”

But he said college leaders also have a responsibility to set up students-athletes for success off the field and court as well.

“My argument of the exploitation comes in when you’re not creating the conditions that institutionally are designed to enhance them holistically,” Cooper said.