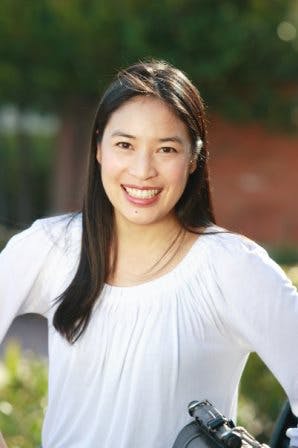 Dr. Janelle Wong is an interdisciplinary political scientist and associate professor of American studies at the University of Maryland.

SAN FRANCISCO—Twenty years ago, it was perceived that low rates of voting among Asian Americans resulted from immigrants who were more interested in homeland politics, making them so-called perpetual foreigners. Another common theory was that Asian Americans were too preoccupied with family life and shoring up their socioeconomic situations to bother to vote.

But those myths are being dispelled by researchers like Dr. Janelle Wong, an interdisciplinary political scientist and associate professor of American studies at the University of Maryland.

“There’s little empirical evidence for either theory,” said Wong, who’s also director of the Asian American studies program at Maryland. “Asian Americans vote at rates that are very similar to the general population, once they’re registered. Also, Asian Americans are not targeted and mobilized at the same level as other groups.”

The consortium seeks to provide public agencies and organizations with data from and analyses of topics focused on Asian Americans and Pacific Islanders (AAPIs). During last week’s forum, scholars sat on multiple panels and discussed their work in the areas of civic engagement, community health, economic inequality and urban planning. Each panel explored a wide range of issues. The health panel, for instance, included AAPI access to insurance under the Affordable Care Act, cardiovascular health among AAPI subgroups and the occupational hazards faced by female AAPI employees at sexually-oriented massage parlors.

Another long-running political myth that Wong addressed was that of Asian Americans who don’t vote but donate large amounts of money to the people running for elected office.

“That isn’t the case,” she said. “Asian Americans give to campaigns at the same rate as Whites and fewer than 15 percent of [what] the population gives.”

“These groups are relatively easy to mobilize because the church is a structured environment,” she explained. “A first look at these groups suggests they’re very Republican, but once you look beyond abortion and other social issues, it’s a more complex portrait. Only about four percent of evangelical Asian Americans favor a smaller government, compared with 70 percent of Whites.”

California Assemblymember Phil Ting, a San Francisco Democrat, appeared at the forum to encourage the scholars to continue their groundbreaking work for its relevance to lawmakers. Understanding the political attitudes of AAPI subgroups is crucial to shaping policy, Ting said.

For instance, he said, Vietnamese voters—long considered conservative stalwarts—were key to a 2012 voter-approved measure that temporarily increases California’s sales tax and requires high-income earners statewide to pay more taxes to fund public schools and other programs. Ting said he welcomes any and all research related to AAPI attitudes surrounding the now-stalled SCA 5, a legislative proposal seeking to repeal certain provisions of Proposition 209 and allow California’s public universities to resume using race in their admissions criteria.

Wong noted how, after she published an op-ed earlier this month that supported affirmative action, “almost every day, Chinese Americans sent me emails condemning my view.”

She said their communications only complicated the policy attitudes exhibited by Asian communities. Multiple surveys show that Asian Americans are more supportive of affirmative action than the general public; as an example, almost 80 percent of Asians in California expressed support for it in 2012.

“As a researcher, I want to know more about how public opinion is mobilized—and demobilized—in our communities,” she said. “Civic engagement among Asian Americans will likely grow more robust as the average length of residence, citizenship and mobilization increase.”

“But the question we are left with,” Wong added, “is whether we can and should grow together as a pan-Asian community. If so, who will our coalition partners be and around which deeply held, deeply shared interests?”

Dr. Paul Watanabe, associate professor of political science at UMass Boston and director of its Institute for Asian American Studies, reminded his counterparts how important it is to build alliances with like-minded scholars and legislators. His institute, established nearly two decades ago and one of four ethnic-oriented research entities on campus, reports directly to the provost and receives state allocations as part of its funding.

“The people who have carried the water for us have been the Black legislators and the Asian staff members for various legislators,” said Watanabe, adding that there have been times when the state has had no Asian American lawmakers.

Referring to the other three race-based UMass Boston research institutes, Watanabe said that, if cost-cutting legislators “ever want to pick off one of us, it’s harder if we are united.”