As she prepares to retire as dean of the School of Nursing at Stony Brook University this spring, Dr. Lee Anne Xippolitos reflects on a health care career that spans almost two decades.

A Stony Brook, New York native, Xippolitos received her bachelor’s and master’s degrees from Stony Brook University and a Ph.D. in nursing science from Adelphi University.

Xippolitos spent 12 years at Stony Brook University Hospital, serving as the chief nursing officer. In this role, she was responsible for the nursing operations of a 603-bed level 3 trauma center and was involved in determining the hospital’s strategic plan and its governing board.

“It was extremely rewarding because you really could use your abilities in the academic setting as well as the clinical setting and it only reinforced the academic world because your stories and your experience were really informing the students and it was all based in reality,” she says. 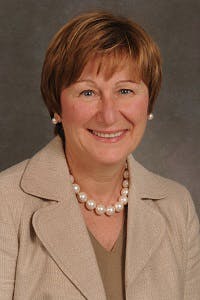 Xippolitos led and co-led several successful initiatives while at the hospital, such as reducing the nursing vacancy rate from 22 percent to 2 percent and served in a joint leadership role on developing the house-wide Electronic Medical Record.

“I’ve worked at the school. I’ve worked at the hospital. I’ve sort of done a ­figure eight and I have to say I think that’s the best of both worlds, when you’re able to blend both your clinical practice and your administrative practice in one piece,” Xippolitos says.

Xippolitos says that one of her most “wonderful” experiences while working at Stony Brook has been being a part of the project to establish an international State University of New York campus, SUNY Korea. Approved in 2012 by the Ministry of Education, Science and Technology in South Korea, SUNY Korea is the ­first American university established in Korea that allows students to participate in both American education and dynamic Korean culture.

Though she will soon retire as school dean, Xippolitos’s work with Stony Brook is not over. She will assume a professorship in global health studies that Xippolitos is “really thrilled about,” she says.

In this new professorship, Xippolitos will continue working with her Korean colleagues from SUNY Korea to develop a standard for nursing on the Island of Jeju in South Korea, something they’ve been working on for a decade.

Under a new agreement signed in 2015, the Stony Brook University School of Nursing works with Cheju Halla University on Jeju Island and the Korean Armed Forces Academy in Daejing, South Korea to provide students with the opportunity to expand their nursing knowledge and be given access to clinical environments in the hosting country. The school is also adding Chenung National University to its list of international campus partners to further expand its resources for American and South Korean students.

The School of Nursing provides several transition and assistance programs for prospective and current students. For instance, its undergraduate program Nursing First is a joint application process partnership with neighboring institution Suffolk Community College where 65 students, if accepted to the program, are also accepted to the university. Nursing First students spend two years at Suffolk and upon completing their associate’s degree program, are automatically admitted to the Stony Brook nursing program and receive their bachelor’s degree if they’ve completed all of the prerequisites that the program has set in place.

Another program the school offers is the 12-month Accelerated Baccalaureate Program, which allows people with prior degrees from SUNY Stony Brook or another comparable institution to join the nursing program. Once students from the program have completed the prerequisites for the Stony Brook nursing program, they’re admitted that June and they graduate from the program the following June, she says.

Looking back at her experiences working in academic and service environments, Xippolitos says nurses and nursing students “give their heart and soul into everything they do.”

“Students just remind me about all that’s good in our profession,” she says. “They come in with enthusiasm and a strong commitment to people and the feeling of compassion, they’re just wonderful people to be around, they’ve got so much energy. … I have to say as a dean the students are the best part of who we are.”