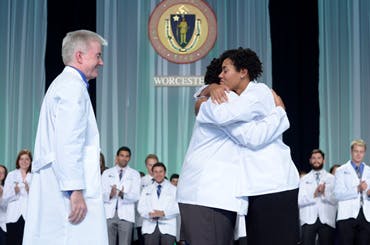 Growing up in Boston’s predominantly Black Roxbury neighborhood, twins Asia and Ashley Matthew began to understand that they wanted to improve the medical prognosis for underserved residents of low-income communities.

When they moved to Quincy, Mass., at age 13 and matriculated at Quincy High School, they had a choice of colleges. They selected Xavier University of Louisiana, the nation’s only historically Black Catholic university and an institution known for its STEM programs and its annual number-one national ranking for sending the most African-Americans to medical schools.

After graduating from Xavier this year with 4.0 GPAs in both pre-med and chemistry, Asia and Ashley, now 22, are now enrolled in the University of Massachusetts Medical School.

Not only were they accepted into UMass’ medical school, but they were admitted into the prestigious M.D./Ph.D. joint program with the Graduate School of Biomedical Sciences, which accepts no more than 10 students each year. For the first time, they were actually planning to go their separate ways. “We applied together, but it’s very, very difficult to get into UMass, which was our number one choice,” Asia told Diverse. “So we had discussed early on that it was probably time for us to separate and spread our wings.”

They’re happy that they’re still together and attending medical school in their home state. All the better for pursuing their number two passion: mentoring and encouraging young people to pursue STEM careers.

“We definitely want to be role models for other people. It’s really important,” said Asia, who views their newfound celebrity as an opportunity to speak out on “clear disparities” that exist in health care. “We need more African-American women, especially in research to help determine why we have disparities — such as more high blood pressure and cardiovascular disease — in our communities.”

Both are excited about research in areas that affect communities of color. “We want to not only help them physically, but to improve their longevity with better models. … We would like to come up with different conventions from those already in place,” said Ashley.

At Xavier, the twins studied the histone deacetylase class of enzymes that play a role in gene expression and gene regulation and are important in development of cancer treatments. Their chemistry professor and mentor at Xavier, Dr. Terry Watt, said that even as undergraduates, the Matthew twins were not just students, they were already scientists.

“They’re really interested in being able to apply the research to medicine, trying to find the root causes of medical problems,” Watt said.

Xavier President Dr. Norman Francis sees Asia and Ashley’s decision to attend Xavier as symbolic of the university’s resilience, despite its recent challenges from natural disasters that have afflicted New Orleans. “These young ladies reaffirm what we have been doing at Xavier in terms of preparing young people for service in the medical field, and they continue the legacy, even though we’ve had [hurricanes] Katrina, Gustav and Isaac.” Francis said top students from all over the country continue to be attracted to Xavier’s renowned STEM programs — despite the weather.

“We lost about 400 students from Katrina in 2005 but we have captured some of that [enrollment] back.” Francis adds that “about 62 percent of our student body are in STEM fields, which we find amazing, because the national average is 40 percent.”

The Matthew twins spent Summer 2010 in the UMass medical school’s Undergraduate Summer Research Fellowship Program. Also while they were at Xavier, Ashley and Asia participated in the Ronald McNair Post-Baccalaureate Achievement Program, which receives high praise from both women.

“In that program, we were encouraged and motivated to attend grad school; we visited different schools and we were able to present our research at conferences. It was a great experience,” Ashley said.

Karen Lawton, director of admissions for the UMass medical school, said the Matthews “had very impressive backgrounds and we are very pleased that they are in our program.”

Each twin has a unique goal for the future. “I want to own a hospital for underserved populations,” Asia states definitively, adding that she is interested in both practice and research. Ashley stresses research, which she feels can serve a broader purpose, although she considers both important.

But Asia and Ashley share a common goal, a sense of commitment to the African-American community. Asia speaks of Rosa Parks and Martin Luther King Jr. and wanting to “expand upon the things they did to improve the lives of others.” And Ashley mentions speaking to middle school children and “watching their eyes light up when we talk about what college life is like.”

Ashley adds, “If I can motivate just one of them to become a doctor or to go into a STEM field, that’s one more role model we’ll have in the future.”