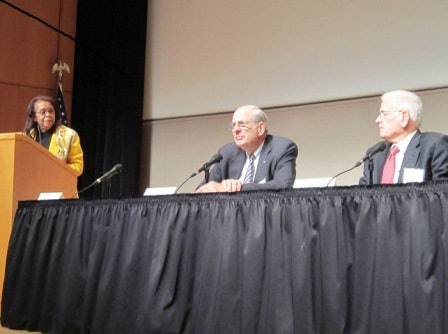 Norman Augustine, center, noted that too many women and minorities have been and are discouraged from pursuing science and engineering.

WASHINGTON — One might expect a Washington think tank that studies the presidency and the Congress to prevail upon those federal government branches to arrest declining educational achievement by American schoolchildren. In an effort partly intended to draw attention to the failing effort of government to reverse national educational achievement decline, the Center for the Study of the Presidency & Congress has issued a public letter to American parents, urging their greater involvement in K-12 education and encouraging them to apply pressure on policymakers to improve science and math instruction in the U.S.

At a Thursday news discussion meeting, the Center for the Study of the Presidency & Congress (CPSC) presented “A Letter on STEM Education to America’s Parents” as an appeal to spur parents to help improve prospects for the global economic competitiveness of the current generation of American children.

Authored by the CPSC’s Committee on K-12 Education, the letter says the committee focuses on STEM (Science, Technology, Engineering and Math) education “not because other fields are unimportant, but rather because excellence in STEM will to a large degree form the basis of our children’s ability to obtain jobs; to defend themselves in a dangerous world; and to live healthy, happy, rewarding lives.” Twenty-four national experts on education and workforce issues served on the CPSC committee.

The letter identifies 10 recommendations specifying actions that individual parents can take “to improve the education of your child and children across the country.”

In grappling with the economic competitiveness issue, one recommendation asks parents to speak to their children about “the important connection between education and training and their lifelong standard of living.”

“Help them to understand that hard work in the classroom and involvement in afterschool STEM programs will pay off in terms of greater career opportunities and higher pay,” the letter says.

Norman Augustine, co-chair of the CPSC committee, cited studies “that show between 50 and 85 percent of the growth in American GDP in recent decades is directly attributed to advancements in science and technology.”

“Furthermore, only about 5 percent of the workforce is engaged in science and engineering. The select 5 percent disproportionately creates jobs for others,” said Augustine, a retired chairman and CEO of the Lockheed Martin Corp. and a former undersecretary of the U.S. Army.

Augustine noted that too many women and minorities have been and are discouraged from pursuing science and engineering due to a lack of social support and inadequate educational opportunities to help them succeed at the collegiate level.

Former Colorado Gov. and CPSC committee co-chair Roy Romer focused his remarks on the letter’s recommendations on the opportunities presented by the recent adoptions of a Common Core Curriculum in some subjects by 46 states. The letter recommends that parents “demand that (their) state’s leaders fully adopt that (Common Core) curriculum or a more rigorous one and expand it into other academic disciplines. Parents are also urged to use local PTA and school board meetings to see that “standards accompanying the Common Core Curriculum be adopted and that they are not watered down.”

“This is a phenomenally new event in America. If we’re going to unify America on this issue of standards, it can’t have the label of federal. It will kill it. It’s got to have state as the label,” Romer said. “States have collaboratively agreed … and are now developing a test structure. That’s (in) language arts and math. Science standards are coming along in a different format.”

Attendees at the news discussion meeting represented a wide range of STEM advocacy groups, university centers, and federal agencies. Dwight Carr, STEM program manager at the Applied Physics Laboratory of the Johns Hopkins University, told the CPSC committee co-chairs that the national letter to parents is much needed and timely. He mentioned that the Applied Physics Laboratory, which is based in Laurel, Md., is hosting the first-ever Parent STEMpowerment Workshop this Saturday, which is “geared to help parents of middle school students prepare their children for science, technology, engineering and math (STEM) careers.”

“I think [the CPSC letter is] a good first step. …You do have parents [as another audience member alluded to] who really care, but are economically disadvantaged. They aren’t necessarily sure who to contact, or how to mobilize other parents in their community. (The letter) gives those parents a tool,” Carr said.

The news briefing was held at the headquarters of the American Association for the Advancement of Science (AAAS). Dr. Shirley Malcom, the head of the Directorate for Education and Human Resources Programs at AAAS, moderated the discussion session.

The CPSC letter can be accessed here.