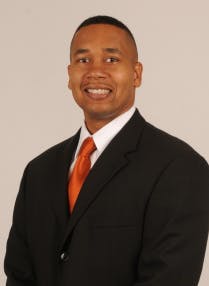 Dr. Juan E. Gilbert is the Andrew Banks Family Preeminence Endowed Chair in the Computing & Information Science & Engineering Department at the University of Florida.Since 2012, 35 prizes have been given out in physics, life sciences and mathematics. Each awardee won a $3 million prize to continue his or her research—almost five times as much as the unrestricted $625,000, which was recently increased from $500,000, given to winners of the MacArthur Fellowships, or “genius grants,” in all fields.

After the first Breakthrough Prizes in math were announced earlier this summer, several scholars, however, say they doubted the generous prizes would do much to inspire members of groups underrepresented in STEM—racial and ethnic minorities and women—to pursue Ph.D.s or careers in those fields.

“How does this relate to students, increasing the pipeline? I don’t see how. It’s not connected to the pipeline in any way, if it’s not about students,” says Dr. Juan E. Gilbert, the Andrew Banks Family Preeminence Endowed Chair in the Computing & Information Science & Engineering Department at the University of Florida. Gilbert is also creator of Applications Quest, a software system designed to help colleges admit diverse classes of students without preferences.

Dr. M. Brian Blake, another computer scientist who is also vice provost for academic affairs at the University of Miami, says he is skeptical.

“I don’t know if it’s going to be a long-term incentive for someone to consider a career in science or math,” Blake says. “People play the lottery regularly because there’s this quick turnaround for the prizes. Whereas, when you think about this, it means you have to be doing high-level work for a long period of time.”

More effective ways to attract underrepresented students into STEM, the scholars indicated, are targeted programs that present accomplished role models and provide engagement with science from the early school years through college and postsecondary education. Such school- and community-based programs already exist in some parts of the country.

“We have put millions of dollars into grants that support STEM programs that are targeted at girls, kids of color and kids in urban communities, who are not well represented right now in the classroom among kids who are interested in STEM,” says Dr. Susan Windham-Bannister, president and CEO of the state-funded Massachusetts Life Sciences Center.

The wealthy sponsors of the Breakthrough Prizes, which include Facebook founder Mark Zuckerberg, say the prizes are intended to “celebrate scientists and generate excitement about the pursuit of science as a career.”

“­There are strategies out there to increase the pipeline, in particular at the graduate level in my discipline, and I know in other disciplines,” Gilbert says.

Unlike those kinds of programs, the Breakthrough Prizes are not targeted. ­They are won through a competition open to scientists and mathematicians in the United States and abroad.

The principal sponsor of the prizes is Yuri Milner, a successful investor in Facebook and other Internet companies. Besides Zuckerberg, other sponsors include Sergey Brin, co-founder of Google, and Jack Ma, founder of the Chinese e-commerce firm Alibaba.

Nominations are submitted online, and, after the inaugural prizes in each discipline are given, the winners are selected by a committee made up of former winners of that prize. The process is more open and transparent than the more secretive process the MacArthur Foundation uses, but Blake wondered if it would help produce diverse winners.

For example, only one of the five Breakthrough math winners this year is a minority: Terence Tao, a UCLA professor.

Blake speculates the Breakthrough Prizes, like the MacArthur grants, will “seem very unattainable” to other scholars of color. Some winning the prize though, if well publicized, could make them public role models for large numbers of underrepresented minorities.

“I think the role models have to be present all the way through,” Blake says. “It can’t just be one interaction you have in middle school, but maybe having some role models in high school, having interactions headed into college. I think you have to have that hierarchy of mentors in place.”

­The Massachusetts Life Sciences Center, which Windham-Bannister has directed since 2008, has funded STEM programs at schools and community-based programs, including the Urban League affiliate in Boston and the Girl Scouts of Eastern Massachusetts. ­The center has a broad mission to promote the life sciences industry in the state, using a $1 billion, 10-year state funding grant.

To aid recruiting of Black students into computer science, Gilbert used funding from the National Science Foundation to found the Institute of African-American Mentoring in Computing Sciences while he was at Clemson. ­The institute is moving with him to Florida.

During his years there, Clemson also produced a reality series of videos called LabDaze, featuring its Black Ph.D. students in computer science. Gilbert calls the series, which he hopes to continue at Florida, an innovative recruiting tool.

“Kids who watch LabDaze,” says Gilbert, “it changes their perception of the sciences and their interest in computer science.”

“All of these are focused on young people of color who are interested in getting Ph.D.s in the life sciences. Yes, we want to encourage that. But we don’t want folks to think that this is the only way into the field,” Windham-Bannister says.

Other careers in the life sciences require less education, she notes, such as lab technicians, animal technicians and factory workers who make diagnostic and medical devices.

“The life sciences hire people with all different skill sets and levels of training,” Windham-Bannister says.

The Massachusetts center rewards employers for hiring community college students as interns. A third of the 1,600 interns since the program launched in 2009 have had less than a bachelor’s degree. Half of the whole group of interns has been women, and a third are of color, according to Windham-Bannister.

Despite their skepticism of the inspirational impact of the Breakthrough Prizes, Gilbert and Blake imagine different scenarios that could help contribute to the diversity of STEM doctoral programs and the STEM workforce.

“If someone were to win that had a pipeline in place already [of diverse graduate students] … and they’re going to hire some more graduate students [with the $3 million], you can see this happening,” says Gilbert. “But that scenario is very small as it relates to this. Other than that, I just don’t see it.”

Blake says the selection of an eminent scientist of color, such as Dr. Walter Massey, a physicist who is president of Morehouse College, could make a difference, reiterating the importance of role models.

“If we had more role models winning those sorts of prizes and having contact with large groups, it could very well be impactful,” says Blake.