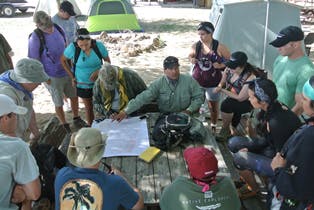 Dr. Kent Smith leads the Native Explorers participants this past May. (Photo courtesy of Oklahoma State University-Tulsa)What do mythological stories from Native American tradition, ancient fossils and STEM mentoring have in common? They can all help propel Native American students to STEM careers, according to Dr. Kent Smith, dean of the recently created Office for the Advancement of American Indians in Medicine and Science at Oklahoma State University’s Center for Health Sciences (OHU-CHS) in Tulsa, Oklahoma.

The office, which was formally created in March, is building a series of STEM development programs for the 39 federally recognized tribes of Oklahoma. Smith is the architect behind it, proposing the concept and now helping to get it off the ground by building on programs he has already created and furthering outreach to tribal communities across the state.

American Indians from the national high school class of 2010 had a graduation rate of 51 percent — and only a tiny fraction went on to pursue STEM in college. In Oklahoma, the numbers are a little better, though still troubling. Oklahoma’s high school class of 2010 graduated 63 percent of American Indian students, according to the National Center for Education Statistics.

“In my opinion, part of the problem for the lack of Natives in these disciplines is [that] there are no mentors,” Smith says. Through engaging volunteers and the OHU-CHS community in his outreach efforts to the tribes, Smith hopes to provide mentors for Native students.

The lack of Native American students in STEM fields touches on another issue: Oklahoma has one of the lowest ratios of primary care physicians per 100,000 inhabitants, particularly in rural areas, where many Native people live. If more Native students choose to go into STEM and medical fields, that may help solve that imbalance, particularly if they decide to return to serve their communities postgraduation.

“Dr. Smith has done a phenomenal job working with the primary tribes, as well as the smaller tribes across the state,” says Dr. William J. Pettit, interim senior associate dean of academic affairs at the College of Osteopathy at OSU-CHS.

By trade, Smith is a professor of anatomy, a profession he arrived at after first working as a veterinarian. An ornithology class inspired him to pursue a doctorate. “As I continued my career as a master’s student and a Ph.D. student, I noticed there were really no other Native Americans in my classes,” Smith says. “There were no Native American teachers or research scientists.”

Smith’s roots are deeply entwined with Oklahoma’s tribal history: he is a member of the Comanche Nation, and has Chickasaw and Cherokee heritage. Smith realized he had a calling to give back — not just to the tribal entities that had helped him along the way to becoming a professor, but to all the tribes of Oklahoma.

“But to give back, you need to be successful and meet other people who are willing to support your ideas, financially, and also with other resources,” Smith says. “So I kind of knuckled down, got through my Ph.D. program, and was lucky and got a tenure-track position.”

Soon thereafter, Smith set to work designing a STEM pipeline that would be attractive to Native Americans.

One of the first programs Smith developed is Native Explorers, which was created in 2010. Native Explorers provides programming for Native Americans of all ages — K-12 students and adults.

“He’s quite an educator. The kids love him,” says Reggie Whitten, an Oklahoma attorney and co-founder of Native Explorers.

Program participants in the summer science and medicine expedition for students over the age of 18 sign up for a two-week excursion to paleontological dig sites, accompanied by Smith, scientists and volunteers. Activities start out at the OHU-CHS campus, where students meet medical students and physicians.

“The purpose of this two-week excursion is to not only introduce them to these fields and disciplines, but to open networks for them and to possibly inspire them to consider one of these disciplines as a career,” Smith says.

At night, the participants build a campfire, around which they share stories, dances and songs from their respective cultures. Smith says he hopes that as students listen to stories and songs that have been in existence for generations upon generations, they will realize that tribes have always sought to explain the natural world around them.

Some of the tales are inspired by natural phenomena — explaining, for example, how the blue bird got its lovely blue color, or why the coyote is brown. The study of science is motivated by a similar impulse: the innately human impulse to understand and to know.

Smith’s work is not prescriptive. Rather, he wants to introduce new possibilities to students.

“At the end of the day, I think we’ve succeeded if a Native student that didn’t have a path goes into college and gets a college degree,” Smith says. “They’re going to be a better citizen. Even if it’s a degree in history or English — they have improved themselves and now they can help to improve others of their tribes.”