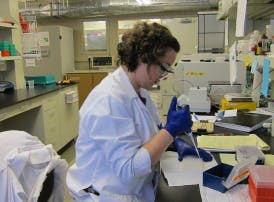 A Bio-Link intern works in a lab.After dropping out of college just a semester short of a biology degree, Marlena Jackson drove a school bus for 16 years to support herself and her two daughters. In her late 30s, she went back to school—two schools, in fact.

Simultaneously, Jackson enrolled in the University of Pacific to finish her bachelor’s in biology and the City College of San Francisco (CCSF), where she entered the community college’s Bridge to Biosciences program. After about a year, she completed both courses of study in 2006.

Since then, Jackson has worked for the biotech company Genentech, currently as a research associate in the Molecular Biology Department. She credits the community college program for her successful transition from a school bus driver to a researcher on the cutting edge of science.

“That was the link that was needed for me to transition into the position I’m in now,” Jackson says. “Most of the credit goes to the instructors who are a part of the program.”

In 1993, CCSF created what was then called the Biotech program to train technicians for local companies. About 3,000 students have gone through the two-semester certificate program. Of the 60 current students, 27 percent are African-American and 16 percent are Hispanic.

“We really weren’t seeing Hispanics and African-Americans in the biotech program at all before this,” recalls Dr. Edith Kaeuper, who led the team in setting up Bridge. “My job was to broaden the diversity, which is what we have now.”

Bridge to Biosciences, also called Bridge to Biotechnology, is being transplanted to a dozen community colleges around the country through Bio-Link, a network funded by the National Science Foundation and based at CCSF that shares curriculum resources and trains instructors to use them, according to Dr. Elaine Johnson, Bio-Link’s director.

Bridge programs, at institutions such as Athens Technical College in Georgia, St. Louis Community College and Contra Costa College in California, aren’t exact replicas of the model at CCSF, but they have retained the core principles of the Bridge to Biosciences model.

“One of the beauties of this network that we’ve built is that we’re connecting people at community colleges who are providing the skills needed for their local workforce. The biotech industry varies from location to location across the country,” Johnson explains.

The national Bio-Link network and Nano-Link, a regional nanotechnology network in the Upper Midwest, are among programs the National Science Foundation (NSF) funds at community colleges across the country to train local technology workers. NSF’s Advanced Technological Education program reaches 57,000 students at 400 to 500 community colleges, about a third of such colleges in the country, says Dr. V. Celeste Carter, who is lead program director.

Currently, the National Science Foundation provides $64 million in funding, Carter says. Underrepresented minority students are concentrated in two-year colleges and make up almost a third of those who benefit from the tech training, he says. Of those students, 17 percent are Hispanic,

Specialty networks like Bio-Link and Nano-Link have helped spread the technology programs to community colleges.

“When we first got started in 1998, there were just a handful of [biotech] programs,” Johnson says, referring to Bio-Link. “Now we’ve got about 82.”

Bio-Link is sharing the Bridge to Biosciences program with other community colleges because it has a record of helping students persist in their studies.

High pass rates in chemistry classes that Bridge students take, Kaeuper says, is one measure of the program’s success.

“Chemistry tends to be the major barrier. It’s also when the classes, unfortunately, become more White. We just didn’t want that to occur,” Kaeuper says. “What we’ve noticed is, once we do the Bridge, the students actually all do extraordinarily well on their next endeavors into chemistry.”

Bridge to Biosciences begins with a learning community of students who take three courses—on the language, math and lab work of biotech—concurrently, with instructors closely coordinating the content they teach students.

Students who participate in the program are older, as are most community college students. The average age is 35, Kaeuper says, and students arrive with varied academic backgrounds—from a GED to a bachelor’s degree in another discipline.

“Our best ones usually tend to be chefs and bartenders. Then our military personnel also do really, really well in this field,” Kaeuper says.

Asked why, Kaeuper explains: “For the chefs and bartenders, they’re used to mixing things precisely. Otherwise, it doesn’t come out [well]. And for the military, they’re used to following standard operating procedures and they’re very detail-oriented.”

Not all students who complete the program wind up working in biotech — some go into nursing, others into positions that are not science-related, Kaeuper says.

Tracking the employment of Bridge graduates is incomplete, but Johnson says they include people working in industry or university labs. Kaeuper says one married couple recently launched their own biotech startup.

As has Bio-Link with Bridge to Biosciences, the newer Nano-Link has shared with other community colleges its educational innovations in teaching about the molecular and atomic structures of materials.

Deb Newberry, director of Nano-Link, says the network grew out of a 2004 NSF grant to create a nanoscience technician program at Dakota County Technical College in Rosemount, Minn.

Other colleges in the region expressed interest in replicating the associate of applied science degree program and, in 2008, NSF-funded Nano-Link was established at Dakota County, with a half-dozen partner schools in Michigan, Illinois, Wisconsin, Minnesota and North Dakota.

The Nano-Link network has since grown to 15 community and technical colleges.

“Eight or nine colleges have content that is a direct result of Nano-Link involvement,” Newberry says, “and then we’re working with another four right now that within the next year will be starting courses or programs.”

Newberry is also working with Sitting Bull College in North Dakota, a tribal college on the Standing Rock Indian Reservation, to create “culturally relevant” lessons about nanoscience. That innovation got underway after Newberry had a conversation earlier this year with Linda Black Elk, a Lakota educational leader on the reservation.

The three lessons being created will measure and examine the matches and mismatches using high-powered microscopes, Newberry says.

“You don’t need to build billion-dollar factories or million-dollar companies or labs or anything to do nanotechnology. There are a lot of aspects and products on nanotechnology that can be done fairly inexpensively,” Newberry says. “I’ve viewed nanoscience as a business that could flourish in a reservation-type environment or rural environment.”

As a result of NSF funding of tech training at community colleges, Native Americans running nanotechnology companies in Indian country is no more improbable than a former school bus driver like Jackson working as a research associate for a biotech company in south San Francisco.