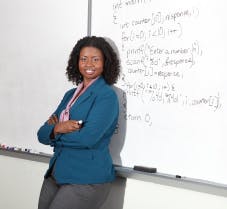 An early curiosity for the world of high technology led Dr. Kyla McMullen, a Diverse 2015 Emerging Scholar, to become the first African-American woman with a Ph.D. in engineering and computer science from the University of Michigan. She’s now an assistant professor at the University of Florida.

“When I was younger, I always liked things that were computerized,” McMullen says. “I like magic, too, and to me, computer science was just like magic. You press a button and something happens in a whole (other) place. I really was intrigued by what in the world made computers run.”

McMullen explored that riddle after her parents moved from Washington, D.C., to Prince George’s County, Maryland, purchased the family’s ­first computer, and enrolled their daughter in the science and technology track at a local high school.

“When I was in high school, we got our ­first computer, and I would literally stay up all night looking at everything on a computer,” recalls McMullen, 31.

A Black teacher of a computer math class served as an early role model. McMullen figured that he “can do computer science. He’s cool. He’s not weird. That really made me (want) to study more, because I struggled in the beginning.”

The next step came when a guidance counselor encouraged her to apply to the Meyerhoff Scholars Program at the University of Maryland, Baltimore County. She won one of the scholarships, designed to produce minority Ph.D.s in STEM ­ fields, on her way to becoming a first-generation college graduate.

McMullen almost was diverted from computer science, though, during graduate school at the University of Michigan. She went to see the graduate chair to seek a solution to a specific problem — an adviser who was not providing advice.

The graduate chair’s response was, ‘Hey, computer science is not for everybody. You should consider some other options.’ He just started naming all these other things that he thought (were) appropriate for me — pretty much saying, people who look like you don’t do this.”

But McMullen also went to see the faculty advocate for Alliance for Graduate Education and the Professoriate, a program that the National Science Foundation funds to increase underrepresented minorities in STEM. The advocate, Dr. Gregory Wakefield, shared her interest in sound in virtual space. He became her dissertation adviser.

After receiving her Ph.D. in 2012 and teaching briefly at Clemson University, McMullen arrived at Florida last August and is an assistant professor in the Department of Electrical and Computer Engineering. She is working on several grant proposals for practical applications for her specialty, “spatial audio,” digitally reproducing sounds through headphones as we would hear them in the physical world.

Some are military applications. McMullen is pitching the U.S. Air Force, for example, on studying human performance while using spatial audio to monitor the status of multiple targets, “so that the ground operator can have better control, better situational awareness,” she says.

“Another is technology (that) can help people who are visually impaired. If you can portray an actual environment to a person who can’t see the locations they need to be in, that could help with navigation,” McMullen says of a grant proposal submitted for internal seed funding.

“If they can see someone who looks like them doing something in a ­field that typically doesn’t have people who look like them, that gives them all the more encouragement,” McMullen says. “That’s my story — my high school teacher.”