Profile of Nation’s Innovators Doesn’t Mirror Those of Gates, Zuckerberg 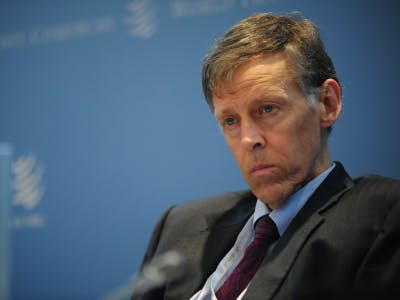 Robert D. Atkinson said “there’s an awful lot of assumptions about who are these people who are involved with innovation in this country.”

With Bill Gates, Steve Jobs and Mark Zuckerberg as its most emblematic figures, the narrative of the college dropout who left school to start a tech company that went on to make billions of dollars and change the world has become a popular one.

But when it comes to who’s regularly innovating at the highest levels in the United States, that particular narrative is also a misleading one.

Most innovators are in their late 40s, hold advanced degrees in STEM fields, attended a public university and work at large companies, not the small startups.

And more than a third of U.S. innovators were born on foreign soil, and a similar amount completed their undergraduate education at a foreign college or university.

That’s according to “The Demographics of Innovation in the United States,” a new report released Wednesday by the Information Technology & Innovation Foundation.

“Why do we care about this? Because there’s an awful lot of assumptions about who are these people who are involved with innovation in this country,” Robert D. Atkinson, president of ITIF, said Wednesday during a panel discussion on Capitol Hill titled “Who Are America’s Innovators and How Can We Help Them?”

While many tend to think of innovators as young folks at Silicon Valley startups, “that’s not really what we found,” Atkinson said.

Among other things, the report found that:

• Women represent just 12 percent of U.S. innovators. “This constitutes a smaller percentage than the female share of undergraduate degree recipients in STEM fields, STEM Ph.D. students, and working scientists and engineers,” the report states. “The average male born in the United States is nine times more likely to contribute to an innovation than the average female.”

• American-born minorities—including Asians, African-Americans, Hispanics, Native Americans, and other ethnicities—comprise just 8 percent of U.S.-born innovators, despite the fact that these groups represent 32 percent of the total US population.

For the report, researchers surveyed more than 900 people who had created “meaningful and marketable innovations.”

They were identified from a variety of sources, including R&D Magazine’s annual R&D 100 Awards. Examples include a 3D printing software package developed by Oak Ridge National Laboratory and Alpha STAR corporation and a speech therapy device for people with Parkinson’s disease created by a medical device startup called SpeechVive.

Researchers also looked at those who had obtained “triadic patents,” which are filed jointly in the United States, the European Union, and Japan and are more difficult to obtain than regular domestic patents.

Several panelists spoke to why the demographics of U.S. innovators are not in sync with U.S. demographics and what can be done to change that reality.

Stacie Gregory, a research fellow at the American Association of University Women, said the lack of women and minorities in engineering emanates from various social-psychological experiences that undermine their desire and belief that they can become STEM professionals.

These experiences include “stereotype threat,” wherein members of a particular group experience anxiety about being judged and treated based on stereotypes about their group or of possibly becoming an example of the stereotype even if they don’t believe in it.

Gregory recounted the experience of a young female engineering student who left the field because of negative experiences with her fellow students.

When Gregory explained what stereotype threat was and asked the student if she had experienced it, she said: “Yes, no doubt.”

“I didn’t really feel included,” Gregory recounted the student as saying. “It was a totally different world for me.”

Gregory said the student represents a case of “lost talent” and one who “obviously had the insight to become an innovator.”

Frederick S. Humphries Jr., Corporate Vice President of U.S. Government Affairs at the Microsoft Corporation, said more must be done to tap minority talent through HBCUs, which are consistently the top producers of African-American holders of STEM degrees.

Atkinson, the ITIF president, said that, to spur more innovation, the U.S. should do more to be more welcoming of high-skill STEM talent from abroad and that this should be done independent of large-scale immigration reform because otherwise it won’t get done.

Noting the findings of the report, Atkinson also called for greater public grants for business since the grants were correlated with award-winning innovations.

“Among the winners of R&D 100 Awards, which come from a diverse range of technological fields, 44.2 percent of innovations received public grant support,” the report states.