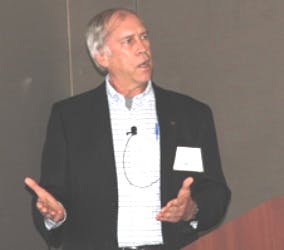 Jim Davis is Vice Provost of Information Technology at UCLA and interim executive director of the institute.

Incorporating more than 200 partners across industry, academia and the nonprofit sector, the institute aims to disrupt a dated, inefficient manufacturing sector—currently the source of one-third of America’s energy use—through cutting-edge technology that will lower costs, reduce emissions and unlock a generation of job growth while bringing greater diversity to the field of technology development.

“Like the banking and financial industry, like the transportation industry with Uber, and like the health care industry that changed with mass digitization, we’re talking about the same kind of transformation: digitizing the manufacturing process,” said Jim Davis, Vice Provost of Information Technology at UCLA and interim executive director of the institute.

The goal: to increase manufacturing efficiency by 15 percent and energy productivity by 50 percent. “If you save energy at those kinds of levels, it translates directly into environmental impact and significant gains in the way we consume energy,” he said.

Likewise, the institute, which is receiving an additional $70 million in matching private funds, will “pay a lot of attention to developing a diverse workforce from all levels of college, including community colleges, bringing in [graduates] and getting them ready for data-centered next-generation IT jobs,” Davis added.

“Lots of people work in information technology, but there’s a shortage in diversity, and there’s room to build that up. We’ll focus on manufacturing and opening up jobs in those sectors, [because] when you look at where the plants are located, you really want to tap into the workforce in that particular area.”

A coalition of universities sits at the core of the project—a joint venture between the Smart Manufacturing Leadership Coalition and the Department of Education—which President Obama introduced June 20 at the third annual SelectUSA Summit in Washington, D.C.

By accelerating the use of advanced sensors, data analytics and controls in the manufacturing process, the institute aims to impact everything from 3-D printing to semiconductors to fuel efficiency. A bakery, for example, which doesn’t manage its energy effectively, can save by using simple sensors, while a complex business like an oil or gas plant can employ sensors in its large-scale furnaces to save on energy and costs.

Some large corporations have committed to partner with the institute, including Microsoft, Google, Northrup Grumman, General Dynamics, Alcoa, BASF, United States Steel Corporation and General Mills. But the emphasis, said Davis, is on boosting efficiency at small- to medium-sized firms—affecting all manner of manufacturing, from the glass and food industries to oil and metals.

“What if you had the right data, at the right time, in the right form, wherever it’s needed? It opens up huge amounts of productivity and energy savings,” said Davis. Not only that, the institute may open a staggering array of “untapped opportunities” to create new jobs, significantly impacting the American economy. “Not tens and hundreds of thousands of jobs, but many, many more,” he added.

While it elevates the role of higher education institutions—which are no longer only developing technological solutions but also establishing regional centers of economic growth and employment—the institute confirms UCLA as ground zero for information and manufacturing technology applied in real, industrial settings.

“UCLA takes its mission as a public institution very seriously, and we are excited to help bridge research, policy and practice in a way we hope can transform manufacturing [and] have a positive impact on our future,” said UCLA Chancellor Gene Block, according to UCLA Newsroom.

Boasting 40,000 small- and medium-sized companies and around 1.3 million manufacturing employees, California is the country’s largest manufacturing base. Now, said Block, “with L.A. as the headquarters of this new institute, our goal is to unite those different elements and help all five regional centers bring innovative solutions to the whole country.”