Educators and policy makers from around the globe gathered in New York over the weekend to discuss innovative approaches to education with the aim of increasing access and achievement.

Saturday’s World Innovation Summit for Education (WISE) was unlike a typical conference. It was noisy, energized and interactive as people gathered in multiple creative spaces, shared ideas, discussed issues, considered solutions and built community. The theme was “Learning Revolutions: Creating Educational Environments for Empowerment and Inclusion.”

Established in 2009, WISE is the Qatar Foundation’s educational initiative. WISE@NY was designed to democratize the conversation and coincided with the United Nation General Assembly and the UN’s Global Goals Week. Her Highness Sheikha Moza bint Nasser, chairperson of Qatar Foundation, was in attendance. 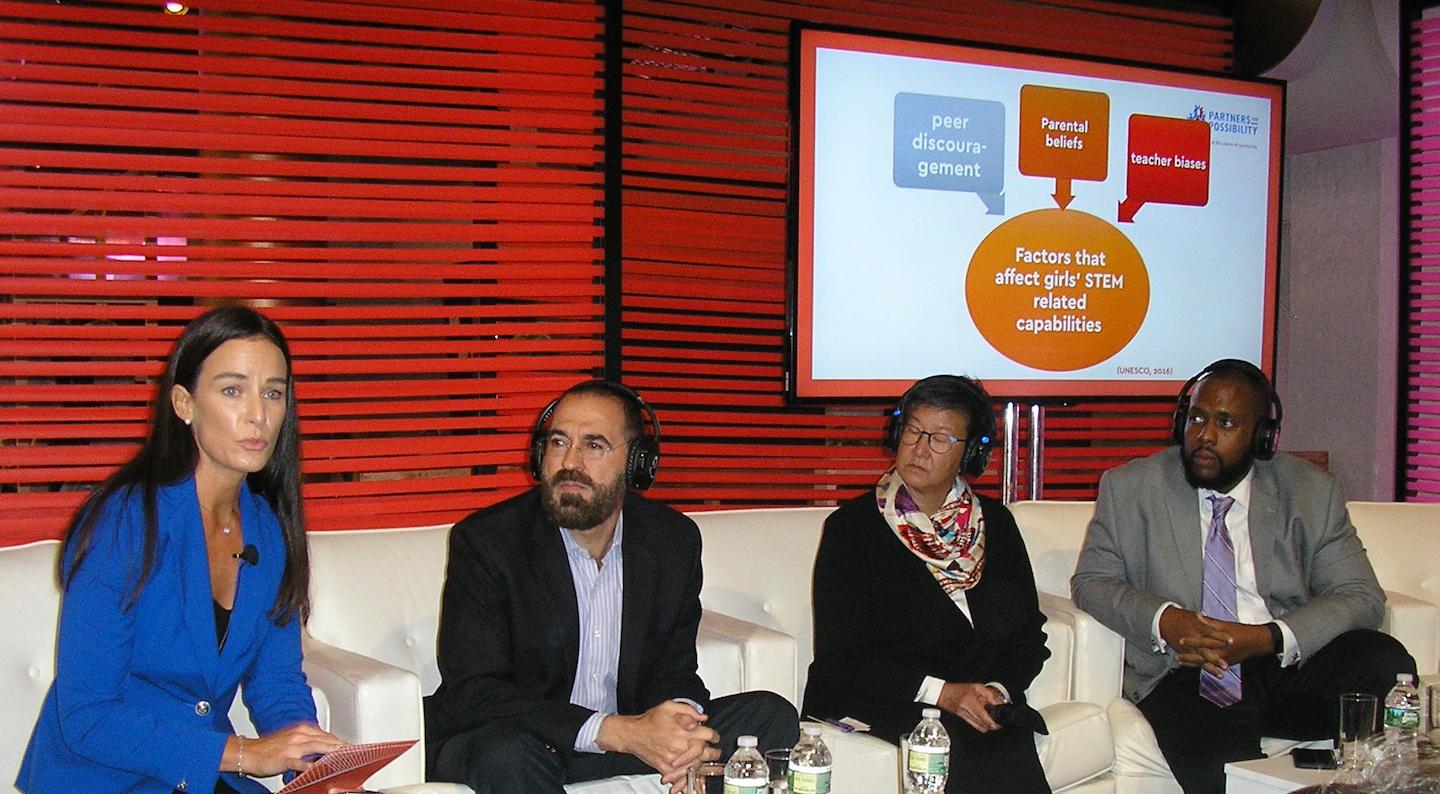 The participants in the panel discussion titled “STEM for All: Tackling Biases, Expanding Opportunities” was asked by moderator Dr. Kiley Adolph why barriers exist and how they can be tackled.

Dr. José Escamilla, director of TecLabs in Monterrey, Mexico, said it’s important to dispel the notion that scientists are male geeks lacking social skills. To bridge the gender gap, he said, encouragement begins at home. Countries, such as India, where the gender gap in STEM fields (science, technology, engineering and mathematics) is smaller, girls are encouraged from a young age to embrace STEM-related work.

Escamilla noted a project he observed in Chile where female high school students were paired with mentors. The girls were inspired to pursue STEM studies.

New York City public middle school math teacher José Luis Vilson said welcoming environments are crucial to eradicate racial and ethnic barriers. In response to an influx of students from Yemen, he learned a bit of Arabic, which he has utilized to explain math problems to his students, thus putting them at ease.

In terms of making STEM subjects relevant and appealing to students, Escamilla said that there is a need to transfer what is learned in the classroom to a new model based on real world challenges. As part of the project Tech 21, starting in 2019, teacherswill develop multi-disciplinary learning modules, putting STEM in a broader societal context. In a similar vein, Vilson said educators have to become more creative. This requires teachers reimagining how to present the subject matter, making it culturally relevant.

“We can attach language to culture in ways that really matter,” said Vinson, who is the author of This Is Not a Test: A New Narrative on Race, Class and Education. “It’s a connectivity issue. It’s about orienting ourselves around affirmation. It’s saying, ‘We are working on this together.’

The panelists agreed that educators should take a multi-disciplinary approach and integrate STEM into other areas. The panelists touched on STEAM, which is STEM with arts added into the mix. A shift in perspective to one in which students work collaboratively and participate in teaching each other—often through problem solving—is also beneficial.

In the afternoon session “Using Language and Culture as Tools for Global Competency in Today’s Classrooms” participants learned about Qatar Foundation grants to fund teaching the Arabic language in U.S. public schools. The goal is to enlighten, dispel negative stereotypes and craft mutual understanding. There are also opportunities for American students to travel to Qatar.

“Arabic opens doors,” said Nasser Al-Khori, Qatar Foundation International liaison, outreach and partnerships manager. “Our focus has always been spreading the language and opening up doors for other people to learn. One of the best ways to break stereotypes…is to teach people the language and let them learn and read for themselves. That way, they discover.”

There is an online curated resource center for Arabic language teachers. It is aligned with common core and standards for teaching a foreign language and teachers are able to upload lessons plans, which other teachers may find useful.

“When you learn a language, you learn the culture as well,” said Al-Khori. “It’s promoting understanding. It’s a way to learn a different culture and have a different insight into a community.”