Growing up in Biloxi, Miss., Dr. Floyd L. Wormely Jr. enjoyed educational activities like science fairs and experiments as a young student. His passion would later lead him to become a noted microbiologist – researching drug discovery, developing newer vaccines against emerging infectious diseases, and educating the public about the importance vaccinations, and supporting research in microbiology.

“I’ve always had an appreciation for science, dating back to junior high and high school. When I went to do my undergraduate at Tulane University, I had an opportunity to have a work study position to help fund my education,” Wormley recalled. “I worked at a virology and bacteriology laboratory at Louisiana State University Medical School also in New Orleans, studying bacterial and viral infections of the eye. That’s when I got hooked on doing microbiology.”

Wormley, the Microsoft President’s Endowed Professor in the University of Texas – San Antonio College of Sciences, was recently named a fellow to the American Association for the Advancement of Science. His election by his peers recognizes his distinguished contributions to the field of medical mycology, immunology and host-pathogen interactions. 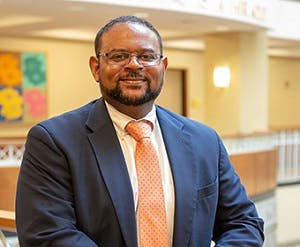 He will be formally inducted at the 2019 AAAS Annual Meeting in Washington, D.C. on Feb. 16.

Founded in 1848, AAAS is the world’s largest general scientific society. The tradition of electing AAAS Fellows began in 1874 to recognize members for their scientifically or socially distinguished efforts to advance science or its applications.

“This honor brings increased credibility which helps with funding. It also brings recognition to the work we are doing at UTSA and in the College of Sciences,” Wormley said.

After obtaining his undergraduate degree, Wormley was accepted into the graduate program at LSU Medical Center in New Orleans.

“It all started from me having an interest in science, being a scientist, having great respect for science and seeing if it was something I would like to do via the work study position. Then, when I really fell in love with it, I applied and was accepted to the Ph.D. program,” Wormley said, acknowledging that his path exemplifies the need for STEM studies.

“We need to provide more opportunities for people to be able to achieve their career aspirations through work study positions, through scholarships and fellowships. The more opportunities we can provide individuals, the better we will be as a city/state/country,” Wormley said.

Looking back, Wormley said the turning point in his career happened when he attended a workshop for the degree program at LSU.

“While I was at the workshop, I met an individual who noticed what I was doing in the laboratory and my work ethic, and actually invited me to go interview for post-doctoral positions at Duke University Medical Center. I went and interviewed and landed a post-position in the lab of Dr. John Perfect. I called it the perfect lab,’’ he said. “I did my post-doctoral studies in medical mycology and infectious diseases at Duke, where I was on training grants.”

The rest is history.

“I did research, I published, and was able to interview for my current position at UTSA and I have been here ever since … and that was in 2005,” said Wormley, who was promoted to associate professor with tenure in 2010. In 2013, he was named associate dean for research in the UTSA College of Sciences. The college makes significant contributions in researching infectious diseases and vaccine development, as well as nanotechnology, brain health, stem cells, medicinal drug discovery, and cybersecurity.

In 2010, Wormley became the youngest person ever to be elected president of the Medical Mycological Society of the Americas, the leading professional organization for mycology researchers in North, Central and South America.  He was also named as a fellow of the prestigious American Academy of Microbiology in 2016 and a Fulbright Scholar for the Fulbright International Education Administrators Program in 2017.

Dr. Howard Grimes, interim Dean of the College of Sciences at UTSA, said Wormley’s work is exemplary and important.

“He studies forms of infectious diseases that are prevalent among those with HIV, AIDS, organ transplant recipients and cancer patients. He is developing vaccines that will eradicate those agents that compromise their health,” Grimes said, explaining that patients often succumb to those diseases. “To date, there are no vaccines available.”

Grimes also praises Wormley’s research, which could lead to the development of immune-based therapies and novel anti-fungal drugs that protect immune-compromised patients from infections.

“Dr. Wormley is one of our brightest and strongest researchers in infectious disease,” Grimes said. “His pioneering work is recognized by a growing number of outstanding scientists and that reality is reflected in his induction as an elected Fellow of the AAAS.”

As for his future in microbiology, Wormley said, “For me it’s about what can I do to help people – to cure the particular disease that I am working on, the next research breakthrough can I have, and what sort of impact I can have on my students and my colleagues.”