From the moment that he catapulted into the academy, Dr. Brian A. Burt has distinguished himself as an exceptional researcher, teacher and thinker.

“He is one of the best minds and a sure bet to become a key contributor to research in education for a long time,” says Burt’s mentor, Dr. Jerlando F. L. Jackson, the Vilas Distinguished Professor of Higher Education and the chair of Educational Leadership & Policy Analysis at the University of Wisconsin-Madison.

Jackson, along with other prominent scholars in higher education, point to Burt’s scholarly productivity, which they say is making an impact on the ­field.

“Brian has translated his intellectual curiosity into a robust and methodologically rigorous research agenda focused on understanding the experiences of Black men in STEM graduate programs,” says Dr. Laura Perna, the James S. Riepe Professor in the Graduate School of Education at the University of Pennsylvania.

That research — funded by the National Science Foundation at the tune of $569,702 over ­five years — will be one of the most comprehensive studies examining Black males in engineering.

Burt — a native of Grand Rapids, Michigan — knew that he wanted to join the teaching profession ever since he was six years old. 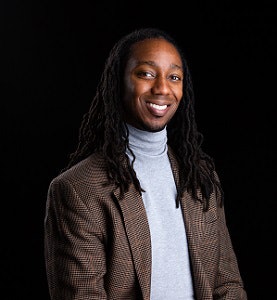 “For me, education was a noble and very respectable ­field,” says the classical-trained pianist who enrolled at Indiana University as a music education major but later changed his major to secondary English education. It was at Indiana University that Burt became interested in research and decided upon graduation from IU to pursue a master’s degree in Educational Policy and Leadership Studies (with a concentration in Higher Education Administration) at the University of Maryland-College Park, where he was taught and mentored by Dr. Sharon Fries-Britt.

After he completed his master’s degree, Burt took a job for two years as the Coordinator for Scholarships and Special Programs in the undergraduate studies office at the Robert H. Smith School of Business at the University of Maryland, College Park, but had already begun following the work of other scholars like Drs. Shaun Harper and Lori Patton Davis, who took him under their wings and began providing mentorship.

“It wasn’t like I was just reading about these people, I was getting to know them,” Burt says, adding that he recalls early conversations about Critical Race Theory with Harper and Patton Davis. “I was always reading,” says Burt, even during those years that he worked and was not a student. “The plan was always the Ph.D.”

He enrolled in the doctoral program in Higher Education at the University of Michigan, where he distinguished himself as a graduate student and became a student representative for the Association for the Study of Higher Education (ASHE) Board of Directors.

After he earned his Ph.D. in 2014, Burt landed an assistant professorship at Iowa State University, where he now teaches graduate students.

“I love my students. They’re bright, they’re inquisitive,” he says. “Teaching graduate students really allows me to be a student. We can learn together. I don’t have all of the answers, but we are going to come up with answer, or rather more questions, together.”

Burt says that Iowa State was a “perfect option” to continue his research agenda, adding that the school has long had a commitment to focusing on scholarship that put a spotlight on equity, diversity and inclusion.

Burt, who has pumped out ­five peer-reviewed articles in the last two years has advised 26 master’s and doctoral students, and is helping to groom the next generation of scholars as a mentor.

“I’m trying to allow individuals to let me know what type of mentoring experience they would like,” says Burt. “Some people want a lot of hand holding and that’s ­ ne, because I’m like that. I’m a lot of work. I’m needy, and that’s not a bad thing.”

Burt sees himself as a scholar who studies graduate student achievement and learning and he spends much of his time thinking a lot about how students are successful.

Later this year, he’ll go up for tenure, but he is clear that he has aspirations that extend far beyond that.

“I want full professor. I want a named professorship. I want all that stuff that my mentors have. I want that and more,” he says, as he looks to the future. “I appreciate that everyone is excited about what I’ve already done, but I think I’m just getting started.”