Dr. Janina M. Jeff, who loved science growing up in New Orleans and studied genetics at Spelman College and Vanderbilt University, is dedicated to bridging that field and a Black American community that historically has viewed it with suspicion. 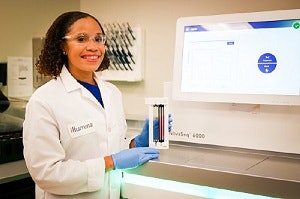 Jeff, who in 2012 was the first AfricanAmerican to graduate from Vanderbilt with a Ph.D. in human genetics, was one of three women of color chosen from 18,000 entrants last summer in the inaugural Spotify Sound Up Bootcamp competition for podcast proposals.

Since then, she has used her $10,000 prize to create a pilot episode and begin production of her podcast In Those Genes. The host is working with a small team on a 12-installment first season titled “46 Chromosomes and a Mule.”

The podcast uses genetics to uncover and explore the lost identities of African-descended Americans through the lens of Black culture. Despite the recent rise in popularity of ancestry-themed television programs and home-test kits, human geneticists traditionally have not studied Black Americans, and those who have tend to use approaches informed by their own White perspective, Jeff has observed.

In a nationwide push to get more women, Black and Hispanic students to study and pursue careers in STEM fields, where they are chronically underrepresented, some thought leaders and researchers are trying to understand what factors influence children – who tend to be naturally curious – to veer away from STEM fields later in their education among underrepresented groups.

That didn’t happen to Jeff, whose path to a career as a geneticist and her current passion was influenced and cultivated by an Afrocentric family that valued education, community uplift and their ethnic heritage. She fondly remembers her grandfather, Morris F.X. Jeff Jr., a civil rights leader, panAfricanist and psychologist with a Ph.D. in social work who held leadership roles in Black-uplift organizations such as the Urban League, 100 Black Men and the National Association of Black Social Workers.

Jeff realized early that not only did she like science and math, she was good at them. They complemented her natural curiosity and creativity, and winning a number of competitions in local and state science fairs fueled her interest.

When Jeff entered Spelman as an undergraduate, an “A” in a genetics course affirmed her decision to major in biology. After graduating, she earned a master’s degree in applied statistics at Vanderbilt and then her doctorate.

She garnered several accolades along the way, including being named a National Human Genome Research Institute Scholar in 2006 and a recipient of the Levi Watkins Award for Commitment to Diversity in 2011.

Jeff soon found that she preferred the bioinformatics and computational science approaches to human genetics over work in wet labs. “I did not like cadavers,” she recalls. “I did not like the sight of blood. I did not think I would be cut out for a career in medicine. I found that early on at Spelman.”

Being among very few Black genetic epidemiologists and noticing a dearth of research on African populations – even though that’s where “a lot of the disease burden was,” Jeff says – she found “an obvious personal connection to the work that enhances your passion and drive.”

Jeff was a post-doctoral fellow at the Icahn School of Medicine at Mount Sinai and currently works as a senior scientist at Illumina, where she has a keen interest in identifying genetic variants that explain disease disparities across populations.

The strong understanding of racial inequality and its cultural implications that Jeff was steeped in as she grew up has influenced how she views the importance of diverse samples in medicine.

“Being in both the world of scientist and humanitarian, I see the work needed socially to enable science. That’s the foundation of my work,” she says. “I’m trying to bring those two worlds together so that everyone wins, because we need each other to see benefits overall. I’m working it out through my work and am really hoping that some solutions come about.”

In Those Genes represents an opportunity to expand the discussion.

“I’ve always been a passionate person about the work that I do and the intersection between genetics and social justice and racial equality for personalized medicine,” Jeff says, “but I didn’t necessarily see a podcast in my future. But it makes sense to me, how we talk about genetics and people of color engaging with it in a way that gets to social equity.”

Jeff wants the podcast to be more than someone venting at a kitchen table. To make it as polished as possible, she has started a GoFundMe campaign to raise $15,000 to help pay production costs for the entire first season.

She is also looking for a partnership to sustain the podcast without compromising its message.

Dr. Dana Crawford, her Ph.D. adviser, has previewed the pilot episode and predicted that the podcast will be as impressive as Jeff was as a student.

“She’s like a superstar now, a very important spokesperson in human genetics for a wider audience beyond scientists,” says Crawford, now an associate professor in the Department of Population and Quantitative Health Sciences at the Cleveland Institute for Computational Biology at Case Western Reserve University. “Her podcast will contribute a viewpoint not common yet when talking about genetic ancestry.”

This article appears in the May 30, 2019 edition of Diverse.