Dr. Idalis Villanueva discovered her interest in engineering sometime during high school when her chemistry teacher in Puerto Rico began pushing her in that direction. 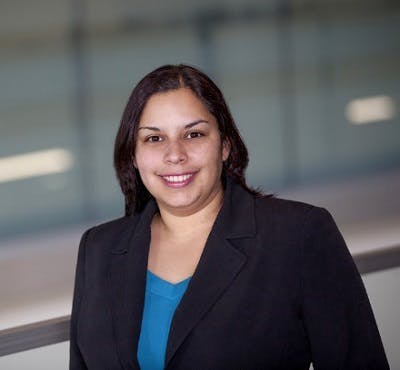 A first-generation college student, Villanueva’s parents stressed the importance of a college education for their three children even though they hadn’t earned a college degree themselves. Her mother started college but later dropped out, and her father had not finished high school.

Still, at an early age, Villanueva was particularly motivated by her father’s ability to fix things.

“To see how he could just quickly pick up a magazine, read it, learn how to build things and just do it well, was very inspiring for me to see growing up,” says Villanueva.

Now, Villanueva is an assistant professor of engineering education at Utah State University, where she is using her own experience as a first-generation, Latina woman to help inspire students — especially women and people of color — to pursue and excel in STEM fields.

The number of minorities in STEM, she says, remains dismal.

“It’s still very small,” she adds. “I don’t think the needle has moved as much nationwide as I think we were hoping for.”

Part of the problem in attracting minorities to STEM fields like engineering rests in retention, says Villanueva.

“You bring them in, you get them excited about engineering and you put them in the system that is not necessarily created to accommodate diversity and inclusion and then they hit a brick wall,” she says. “I do have people of color and women coming to me for mentorship and guidance and having someone to talk to makes a big difference.”

While pursuing graduate studies at the University of Colorado-Boulder she began having serious doubts about engineering as a future career.

“I went through a lot of experiences being the only Puerto Rican woman to graduate from that department in over 100 years,” she says, adding that her encounters with sexism and racism took a toll.

“I was very grateful for the education, but the environment was sometimes very difficult to navigate,” she says.

After earning her Ph.D., she decided to pursue a post-doc in analytical cell biology at the National Institute of Health.

Initially, Villanueva had plans of becoming a tissue engineer, where she would develop artificial organ tissues, but grew an interest in education — particularly engineering education — which was a relatively new and growing field at the time.

“I began wondering if there was such a thing as engineering education and started looking online. I did find it. It was an up-and-coming field at the time. There was not a lot of people graduating from that. There was one or two programs at the time,” she says.

Villanueva did not pursue the tenure track right away. Instead, she took a non-tenure-track lecturer position at the University of Maryland, College Park for two years to gain teaching experience.

“I realized I had a lot of transferable skills to bring to teaching, mentoring and the ability to think critically,” she says, adding that she also partnered at the time with education organizations to provide her expertise to them around STEM-related issues. “Once I felt like I had acquired enough transferable skills, then I pursued a tenure-track position in engineering education.

In 2013, she was hired at Utah State University and is coming up for tenure this year.

During her time at USU, Villanueva has been recognized with the Presidential Early Career Award for Scientists and Engineers, secured a National Science Foundation award and has been lauded for her research.

A rising star in academe, Villanueva teaches engineering classes to undergraduates and education classes to graduate students. The experience, she says, has been life-changing.

“Considering the context that they’re going to be in, I’m very keen on trying to get them to acquire as many real-world experiences as I possibly can,” she says.

Her growing research focuses on the topic Hidden Curriculum, which seeks to unearth the “implicit messages, values, attitudes and beliefs that majority groups and systems have that are not necessarily conveyed to minority groups,” she says.

In this regard, Villanueva says that she draws upon her experience as a first-generation, Latina woman scholar to pour into her students.