Dr. Johnna Frierson’s office says a lot about her. There’s a poster from the movie Hidden Figures on the wall. A notebook — featuring famous women in STEM on the cover — rests on her desk. And she has a collection of mugs, one with a picture of Rep. Maxine Waters that says, “Reclaiming My Time.”

Frierson started as the assistant dean for graduate and postdoctoral diversity and inclusion for the Duke University School of Medicine in July. And in the little time she’s had, she’s already been busy. In her current role, she leads a new office called IDEALS or Inclusion, Diversity, Equity, Advancement, and Leadership in the Sciences, created to serve graduate and postdoctoral students doing research in biomedical sciences. 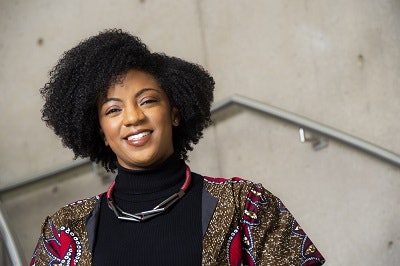 “It’s been a whirlwind,” she says.

Frierson comes to her new position with experience in both the sciences and diversity work. She earned her bachelor’s degree in biology at Furman University and completed the Initiative for Maximizing Student Diversity postbaccalaureate program at Vanderbilt University where she completed her Ph.D. in virology. She also did postdoctoral work at the University of North Carolina-Chapel Hill School of Medicine. Her research focused on how viruses attach to cells, a critical step toward infection. She then became founding director of the Office of Diversity and Inclusion at the Pratt School of Engineering at Duke, where she served since 2015.

Frierson’s experience in her postbaccalaureate program laid the foundation for the work she does today. There, the program provided her with a strong cohort of students of color in a university where she was often the only African-American woman — or African-American — in the laboratory.

The juxtaposition raised questions for her. She had a minority peer group of scholars she deeply respected but she still often found herself in academic spaces where people from underrepresented backgrounds weren’t present.

“I definitely understood the importance of mentoring, connecting with people and being comfortable in the space that you’re in, especially as a minority student,” she says.

Now, Frierson works to develop a support system for graduate and postdoctoral students, but even though she’s no longer doing virology research, she hasn’t left her identity as a scientist behind.

“First, I’m a scientist,” she says. “I think very analytically and very methodically about any problem that I’m trying to solve, including improving diversity, equity and inclusion.”

To set goals for the future, Frierson devised four pillars, or key values, she wants to inform her office’s work: consistency, belonging, infrastructure and accountability.

“We need to make sure that whatever we start, we have the resources, the bandwidth and the capacity to continue and that it’s done sustainably so people know that our values are not just of the moment, that we really want to have long-lasting impact in the community,” she says.

It’s particularly important to her that students at Duke University School of Medicine find a sense of belonging. As a graduate student, there were times she felt “very conspicuous” as a woman of color, she says. Sometimes when she went to conferences, she felt like there were “a lot of eyes” on her.

“I would feel like not only did I have to perform well, I had to perform especially well, because if I didn’t, then maybe people might question whether I belonged or my capabilities,” she says. For graduate students in STEM fields, she finds those feelings can be “challenging to navigate,” especially because their academic work is “really rigorous.”

“There are a lot of ups and downs where things don’t go as you’ve planned,” she says. “So, on top of that to have to question whether you belong or have to be questioned, it just adds an additional layer that can be challenging for anyone and can really knock people off of their track. Science is hard enough.”

Frierson has a lot of plans for the future. She wants to continue connecting with regional partners — like the University of North Carolina and North Carolina State University — and getting to know students, administrators and faculty. She’s interested in contributing to research on what limits access for diverse graduate and postdoctoral students. And one day, she hopes to create a postbaccalaureate program similar to the one that started her on her current career path.

“We have a lot of work to do as a community to make sure our day-to-day interactions really connect with the values I know that we have,” she says. “I’m really happy that my position was created and that I have the resources to do the things I see as important as a part of my role and to be able to set that vision. I’m really excited about the good things we’ll be able to do together.”