On a recent Thursday evening, Samiatu Yussef sat thoughtfully at a table in an anatomy lab at the University Maryland, Baltimore (UMB). She says it’s one of her favorite subjects. On that day, she and her classmates are learning about the brain and drawing colorful posters. ­ There is a lot of information to grasp. Having mentors nearby and a color-coded diagram helps, but a studious Yussef is busy jotting down words that are sure to help her master and recall each region of an organ and its function. 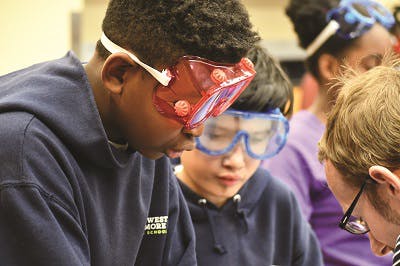 Madeline Nunez, her science teacher, says the anatomy lesson is a foundation before students actually see and feel what a real brain looks like. Yussef can’t wait for the reveal. For the eighth-grader who wants to be a neurosurgeon, hands-on learning opportunities like this are giving her a head start on a STEM career.

She’s just in middle school, but Yussef is already considered a young scientist. ­ The spark for that dream was ignited when she entered the Continuing Umbrella of Research Experiences (CURE) program two years ago as a sixth-grader. At a ceremony similar to one experienced by first-year medical students, Yussef and her classmates received white lab coats to mark their induction into the prestigious STEM program that students attend at no cost. For them, the white coats may serve as a reminder that with access, opportunity and a clear path, they can become health care providers, scientists, clinicians and biomedical researchers — even in fields where few, today, look like them.

Since it launched in 2015 with funding from the National Cancer Institute (NCI), diversifying the city’s STEM talent pool while engaging students in cancer research and education has been the aim of UMB CURE. In 1999, NCI created CURE as a way to increase diversity in the cancer research workforce.

It targets high school students and undergraduates. But UMB decided that the entry point for its CURE program needed to be sooner, starting with the middle school years — a prime time to interest young students in STEM and engage them in enrichment programs, educators say. It recruits students and some of the program’s STEM teachers for CURE from three Baltimore public schools: Southwest Baltimore Charter School, Green Street Academy and Franklin Square Elementary and Middle School.

Josiah Bryant, 15, attends Green Street Academy. When he entered the program four years ago, Bryant was among the first class of students to give the UMB STEM initiative a try.

“CURE is giving us scholars an opportunity to better ourselves, our families and communities,” Bryant shared before finding a seat in the UMB CURE study hall to cram for a geometry test. Now in high school, Bryant has moved on to a new program called CURE Connections that’s working, so far, with ninth- and 10th-grade scholars to get them “college-ready,” says Dr. Gia Grier-McGinnis, executive director of UMB CURE. Plans are to add 11th- and 12th-graders too.

The program’s retention rate is high. She says around 90% return to the CURE program each year like Bryant.

“They stick with CURE, and their parents also make the long-term commitment,” Grier-McGinnis says. “That’s impressive, particularly for this community where there are lots of barriers and reasons for people to drop out.”

Housing insecurity and job instability have been among those barriers. But in getting her CURE Scholars to the finish line she hopes to change that narrative for this generation.

If they want to pursue careers in cancer research, healthcare or in 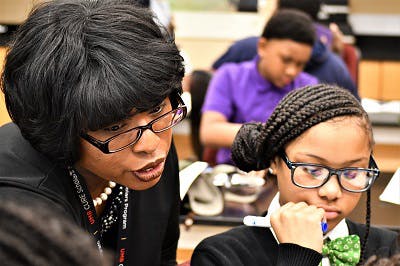 TaShara C. Bailey, Ph.D. works with a student in an anatomy
class.

any of the STEM fields, jobs will be plentiful and pay well, says Grier-McGinnis. The U.S. Bureau of Labor Statistics estimates that by 2027 the number of jobs in science, technology, engineering and math will grow 13%, compared to 9% for non-STEM-related jobs. But, according to the National Math and Science Initiative, only 36% of all high school graduates are ready to take a college-level science course.

High school students in CURE Connections “earned a 3.0 or higher grade point average (41%)” at their schools based on the program’s year-four data (the most recent).

It’s no mistake that UMB CURE chose to look for future healers among those who are hurting in Baltimore’s Westside neighborhoods. Those future cancer researchers and health care providers live, go to school and play where the majority of residents are Black, are struggling socially and economically and have been touched by cancer. Compared to the rest of the state, cancer rates among African-Americans who live on the Westside are high.

“[In] disadvantaged communities like those in West Baltimore, cancer rates are of epidemic proportions,” says Dr. Kevin J. Cullen, lead investigator on the UMB CURE grant and director of the University of Maryland Marlene and Stewart Greenebaum Cancer Center, a partner with the CURE Scholars Program.

UMB CURE’s goal of diversifying the biomedical sciences workforce is a critical step in reducing the cancer burden in Baltimore, says Dr. Sanya A. Springfield, who directs the NCI’s Center to Reduce Cancer Health Disparities.

Over the years, the woes of Baltimore City and its closest neighbors — languishing segregation, festering health disparities and low-performing schools among them — have not gone unnoticed by UMB, contends Dr. TaShara C. Bailey, the program’s STEM curriculum coordinator.

“As ‘an anchor institution,’ we see what happens to the people in the community as our responsibility,” she says. “We look for ways to build partnerships and trust with them. We are part of a team.”

The university’s community engagement center has been a visible sign of UMB’s commitment to its community’s health.

Within the past four years, the center had already outgrown its space. So, this October, the university broke ground on an expansive new center that will also house the UMB CURE program.

Dr. Jay A. Perman, UMB’s president since 2010, has taken the lead on strengthening these kind of community ties and improving the well-being of children growing up in West Baltimore. It’s included fostering fellow champions for CURE among his home team across the campus, Bailey adds. But that leadership is about to change. Starting next summer, Perman will be the new chancellor of the entire University System of Maryland. He was named to the post earlier this month.

When asked about what Perman’s departure could mean for the future of UMB CURE, Grier-McGinnis says she and her team are hopeful.

“While our CURE family is sad to see Dr. Perman leave UMB, we are excited at the possibility of having a USM-wide champion for biomedical pipeline programs.”

Perman says that when he looked in his university’s backyard and across the city, he saw children who were saddled with “a unique set of circumstances, some of which complicate their ability to achieve higher education and rewarding careers.”

The UMB CURE program, he says, takes on two major issues: race- and income-based cancer disparities, as well as diversity in the cancer health workforce. The program intends to tackle these issues while simultaneously guiding students toward fulfilling careers. 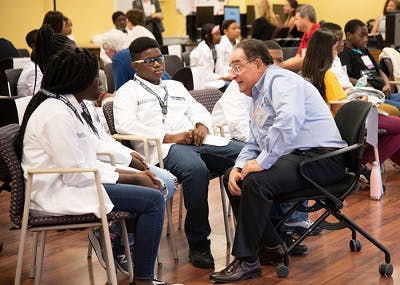 UMB President Jay A. Perman gets acquainted
with CURE scholars.

takes hundreds of people who are willing to steer Black children to the STEM pipeline and equip them with the resources they need along the way to be successful in grade school, college, careers and beyond. There are nearly 300 program mentors and volunteers, among them renowned, practicing and retired scientists, physicians, nurses, lawyers, social workers, and STEM educators. There are also current students in UMB’s seven graduate and professional schools. Each of the 69 UMB CURE middle school scholars has five mentors, generally grad students, who guide them through a curriculum of anatomy, chemistry, engineering, coding and robotics.

With a belief that when families and communities are strong, children can thrive, UMB CURE makes parents a part of a network of academic support. For them, it begins with a long commitment to enroll their children in a program that can propel them through school, to college and careers. Scholars meet twice weekly after school, on Saturdays for CURE labs, tutoring sessions and workshops and during the summer.

The program provides career training services to parents on Saturdays, while students are working with their mentors. There’s even a social worker on staff who visits scholars and their families at home and works with them to address personal and family needs.

Despite the odds and their zip code, Bailey says UMB CURE Scholars have plenty to contribute to their communities, to the STEM fields and their own futures.

“As a strengths-based program,” she adds, “we want to inspire and nurture our scholars.”

The stories that students often share about family members who have cancer, says Bailey, have turned into teachable moments about scientific research — and may spark cures that can one day heal their city.