SEATTLE —  The 51 Pegasi b Fellowship, an initiative of the Heising-Simons Foundation, supports early career astronomers – but until recently, it mostly supported male astronomers. Out of 12 winners, only two were female since the grant program began in 2017.

But in 2019, women won four out of six fellowships. 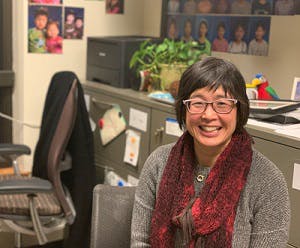 Last year, the foundation took the numbers as a wake-up call and changed their evaluation process with the help of Dr. Joyce Yen, director of the University of Washington’s ADVANCE Center for Institutional Change, an NSF-funded center to promote women in STEM on campus.

Yen recently published an article in the journal Nature Astronomy about how the evaluation process for fellowships can be more welcoming to female scientists, outlining how the Heising-Science Foundation used social science research to tweak its review methods.

The bridging of the two worlds is “increasingly common” in academia, she said, but “even though [social science] is in the vernacular and there is robust research on these topics, there’s still resistance. There are still people who are reluctant to change the way things have been done.”

As a former engineering faculty member, she sees her role as that of a “translator, synthesizer and liaison,” so STEM fields can “learn from the riches of social sciences.”

But she found the leadership of the Heising-Simons Foundation to be eager for change. Among other tweaks, the foundation nixed its requirement that universities nominate applicants, accepting applications from candidates themselves. The new application also asked for a diversity, equity and inclusion statement from applicants, and it developed a clear rubric for evaluating candidates, leaving less room for implicit bias.

When the evaluation process is less organized, Yen noted, people tend to “make up evaluation criteria on the fly.”

“Why not have clear expectations?” she asked. “Then people can rise to those expectations.”

For each candidate, reviewers discussed four specific, previously outlined questions. Reviewers spent an equal amount of time on each candidate with a break in the middle to make sure applicants discussed later in the review session received more equal consideration. Reviewers had to listen to a presentation about implicit bias prior to the meeting, and Yen was present during the evaluation process for guidance.

Yen stressed that equitable access to opportunities like the 51 Pegasi b Fellowship can make a big difference for career trajectories in STEM.

For one thing, these fellowships offer resources. 51 Pegasi b Fellows receive a three-year grant of up to $375,000 for independent research.

But more than that, prestigious fellowships can be a “seal of excellence” for scientists early in their careers, she said, signaling their skill to people looking at their work in the future and likely improving their chances of attaining a faculty position.

“It’s a stepping stone along the way that really catapults people,” Yen said. “What we want to do is we want to say, ‘Let’s make sure that we’re not inadvertently giving a leg up to only particular kinds of people.”

MIT research scientist Dr. Clara Sousa-Silva, one of the 2019 51 Pegasi b Fellowship recipients, found that the structure of the application process really did make a difference for her.

For one thing, she wouldn’t have applied if the fellowship needed a university nomination, she said. In fact, the requirement prevented her from applying last year. As an early-career scientist, she didn’t feel comfortable asking a senior faculty member to nominate her.

“I found that was a real barrier to entry,” Sousa-Silva said. “The thought of finding a sponsor, I found that really intimidating.”

In general, she notices that fellowship applications rely heavily on help from an advisor, which isn’t always to young scientists’ advantage.

“When you’re young, you don’t have that many senior people you can ask to write you letters, who know your work, who would vouch for you,” she said.

She also appreciated that applicants’ diversity, equity and inclusion statements were weighed as a part of the reviewers’ rubric for the 51 Pegasi b Fellowship. In her statement, she wrote about how she’s working on publishable research with high school students with the hopes of diversifying the pipeline for astronomy.

“I never get to write about [outreach work] because there’s no place in applications to put this stuff,” she said. And when she is asked to share about it, she worries “no one cares.”

She was glad reviewers not only required a diversity, equity and inclusion statement but “actively looked at it.”

For the future, Yen hopes other fellowship programs will learn from the Heising-Simons Foundation’s reforms that “there’s always some small step” they can take to make their evaluations more equitable. And to actually implement those steps, they need leaders to “put in the time to have these conversations early” so that real changes can be made.

“All the hard work is that upfront strategic thinking,” she said.